The sad state of the 76ers 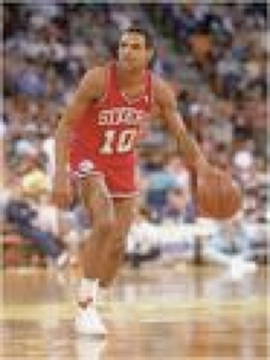 As Mutoni alluded to Friday, things are not good in the world of the 76ers. This is something that Philly sports expert Michael Tillery (of the Starting 5) knows well. Mike is also an occasional SLAM contributor, and while at a Sixer game recently to work on a SLAM feature recently (not on a Sixer, mind you), he was struck by how pitiful his hometown franchise is looking these days. These are his thoughts…

The 2007-’08 76ers are searching for consistency as well as a team unifying identity. Philadelphia is a town not yet over the sting of last year’s mid-season blockbuster trade which sent Allen Iverson to Denver essentially for Andre Miller. Iverson was a beloved player in a town that initially took it’s sweet ole time warming up to the charismatic, courageous as well as enigmatic superstar. To more experienced Philly fans, the trade symbolized the end of an era similar to those of past greats Charles Barkley (traded to Phoenix in ‘93, won MVP and led the Suns to the finals), Julius Erving (retired in ‘87, but was the subject of trade rumors late in his career even though he‘s one of the all time greats) and Wilt Chamberlain (traded to the Lakers after averaging 24 points, a ridiculous 23 rebounds and dishing out 702 assists). Cheeks—Philly’s greatest point guard ever—himself found out he was traded to the Spurs disrespectfully by the Philly media. Seems ridiculous players of such all time reverence are treated so unceremoniously. Why fans wonder why this team has been so unsuccessful lately is beyond logic.

Philly historically hasn’t sold out it’s NBA arena—even in the best of times. This particular recent night, there was a little over half of Wachovia Center total capacity. Fans here are known for their passion as well as their legendary frustration. They don’t care about having some of the best players of all time. They want to win and anything else is irrelevant. They will vocally persuade management to trade away even Hall of Fame caliber talent if consistent results just aren‘t there. The present generation knows nothing about a championship parade in South Philly and by the looks of things, won‘t know for quite some time.

Most barely remember Dr. J and Wilt is probably most known for banging somebody’s mom in the ’hood than being the G.O.A.T. This season, unless sweeping changes are made (cough Billy King cough), will be a year long mission of meaningless Wachovia Center sneaker hardwood screeches culminating with yet another draft day debacle. Thaddeus Young has yet to play any significant time while players from the six teams drafting below the 13th spot (Young’s position) have had their minutes increased.

Their most hated rival in Boston has upgraded by bringing in Kevin Garnett and Ray Allen and in the process electrified the city. Philly yearns for a winner and instead have been getting crushed game in and game out.

Double digit defeats in the beginning of the season are most distressing because teams usually play extra hard for the first month or so. The Sixers undoubtedly break this stereotype and seem to be going through the motions; resembling a team playing out the string at the end of the season. Tonight’s effort epitomizes this sentiment.

After the game, the look on Mo Cheeks face spoke volumes. It was the look of an emotionally spent coach who had either laid into his team in the locker room or chose not because he just didn’t have the strength. Mo had to once again face the fire of the Philly media. Before Cheeks stepped to the podium, Billy King swept past—head down—like a kid rushing to get out of an extremely long church service by claiming he had to use the bathroom. King and the rest of the Comcast brass share most of the blame for throwing together a team that isn’t set up to beat nearby Temple University, let alone the Big Three of Boston. As Cheeks steps to the mic with a sigh, most of the questions surrounded the Sixers inability to stop teams during game-changing minutes—which ultimately decide the outcome psychologically. A 10-point run by the opposition before halftime usually comes back to haunt when attempting to claw from behind late in the fourth quarter. One missed free throw can be devastating. These games also have a carry over affect so cancerous to a young team it can kill your entire season. Coach killing listless effort becomes the norm and players are continuously one step behind in critical stages. A weary Coach Cheeks paints a more optimistic view of his young team: “Our defense was not up to par like it has been. What I told the players is that we’ve had a chance to win (some early season games). And then we come in here…and certainly there are games like this during the season. One thing I mentioned to the team was about consistent play. The way we are going to win games is by just outworking everyone else.”

That last statement should be highlighted. This team is lacking the talent to win games late. It’s going to take a behemoth effort from hold over and budding superstar Andre Iguodala to keep this team close. I asked Andre what it‘s going to take for his team to win: “We have to be able to give effort night in and night out to make sure we put ourselves in a position to win. Tonight, we just didn’t have it.”

Another hold over is fifth-year vet Kyle Korver, who is one of the players that has shown effort along with Iguodala. This is how he described his development as a NBA player: “When I first came into the league I primarily was a spot up shooter and really wasn’t asked to do a whole lot more.” I expressed to him how melancholy the locker room appeared and Kyle, like his coach, expressed optimism: “I feel like we are building right now. I feel like we are building this the right way. We have some great young pieces that didn’t show up tonight but have in earlier games this season. We’ve played a lot of good teams early on but are right there. We’re probably a piece away from seriously contending, but after this (season) we have a whole lot of cap space. The future is bright here. It’s something I know I want to be a part of.”

MT: Kyle you seem to give necessary effort, is that your competitive nature, or desire to give Philly fans something to cheer?

KK: “It’s definitely both. I’ve never been on the East coast before I came here to Philly. It’s definitely different here. The fans have supported me the entire time. All I can do is play hard and get better ever year. I think the fans will appreciate that. If we don’t play hard as a team, the fans will sense that also and let you know. The competitor in me isn’t satisfied with the way I’ve been shooting the ball, but that’s the way I am and that is what drives me.”

Kevin Ollie has been around Philly for a while. He’s been released, resigned and ultimately ends up roaming the Wachovia Center floor with his professional brand of consistent veteran play.

MT: Kevin what is it going to take to sustain a measure of consistency? What would you say to the fans of this town to keep their heads up?

KO: “I think we have a good nucleus of guys—especially with Andre Miller running the point. He’s a great point guard that gets everyone involved. Then you have your rock in Andre that’s going to be consistent every night. He’s stepping up to that superstar level where he can get twenty points every night. We also have a lot of young guys that‘s coming along. You have Lou Williams who is coming into his own. Like your question, we have to find a level of consistency. I think we are still trying to find that a little bit. We’re working hard and I’ll think we’ll get it done.

I would tell the fans to just stay with us. The fans that we do have are loyal and faithful. You have to stay with a team through the good times and the bad times. As long as we put forth the effort, they’ll continue to support. Hopefully, they’ll stick behind us.”

It remains to be seen if the positive outlook these players express is enough to carry this young team through the rigors of an unforgiving NBA season. Louis Williams has to step up big, but essentially is a rookie because he hasn’t logged over 11 minutes a game in his three year career. Samuel Dalembert has been a disappointment considering the massive amount of money owed to him through 2011. Willie Green is a capable veteran who has to be able to play an entire season to truly make an impact. Rodney Carney is an athletic slasher who came out of Memphis last year; he was expected to be a force offensively but looks lost on defense every single night. The bench is littered with young players who really shouldn‘t be on an NBA roster. Cheeks’ job is going to be made that much harder if this team doesn’t add some veteran post leadership that will make teams think twice about coming down the lane.

I alluded earlier to Philadelphia’s penchant for trading away great players. Dre Iguodala, while not yet a superstar, is the only player left on the roster with high trade value. Billy King desperately needs to do something significant to bring back the shine this team has had for decades. He hasn’t proven to be capable of handling the responsibilities of a NBA GM. If he doesn’t do what it takes, then Philly brass should kick him out of town as fast as you can say Larry Brown.