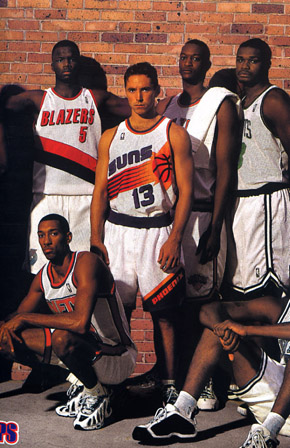 In 1999, at 22-years-old, Antoine Walker signed a six-year $71 million deal with the Boston Celtics. It prompted Rick Pitino, then Celtics president and coach, to declare Walker, “will never have to worry about money again in his life.” A decade later, ‘Toine is broke. According to recent reports, Walker has squandered away much of his $110 million he earned over 13 seasons in the NBA. The Boston Globe recently reported, “during the last seven months, Walker has been pursued by multiple financial institutions for unpaid debts totaling more than $4 million. Court documents filed in Illinois and Florida reveal Walker was named a defendant in three recent debt-related civil cases, in addition to the ongoing check-kiting case. His former agent is also after him, citing a heap of unpaid fees.” All of this from a player who had so much potential. Check out Scoop’s story on Antoine back in Issue 15, and by the end all you can do is shake your head at the guy.–Matt Lawyue

ANTOINE WALKER DOESN’T FEEL IT. HE’S TOO CLOSE. But this is the cost of being good, possibly great.

…And with the second pick of the 1986 NBA Draft, the Boston Celtics select…Len Bias of the University of Maryland.

Ten years ago, Commissioner David Stern stood at the podium and said those words. Bias died of a cocaine overdose the day after the draft, and never played a minute for the Celtics. The decline began. Ten years later, the words are heard again.

…And with the sixth pick of the 1996 NBA Draft, the Boston Celtics select…Antoine Walker of the University of Kentucky.

Here we go again, a chance for the Celtics to reverse the flow that began 10 years ago. Still, Antoine’s too close.

“Naw, I don’t feel the shadow of Len Bias. I can’t,” he says. “This is a once-in-a-lifetime dream to get to play in the NBA, play against the greatest. Against Michael Jordan. I know I’m the highest draft pick of the Celtics since Len, but I have to overlook that situation and look at the positive. This is my one chance, man. This is what you dream about when you’re a kid.”

I answer, “Yeah, but they’re going to put the pressure on you. Especially in Boston. It’s almost like a compliment because of how nice Len’s game was. Doesn’t that kind of bother you?”

He responds. “Oh no. I live for this type of stuff. I call this good pressure. To be successful, people need to expect that. And if you are not successful, everybody’s going to say, ‘Well, we knew he wasn’t no good.'”

In life, there are times when you’re supposed to be scared to ask that question. Because just when you think everything is perfect…boom! The script gets flipped, and Len Bias and Reggie Lewis are no longer around to complete the dream. Antoine Walker is never afraid. This life that he gets to play basketball in is perfect to him. His glass is always half full, never half empty.

Olympia Fields, IL. A distant, quiet south suburb of Chicago. It’s nice, clean. Modest living. Antoine Walker is at his boy’s crib, packing. Two days away from putting on his No. 8 green uniform and black signature adidas for the first time, he refuses to be nervous. He’s too close.

Ask him about expectations, he’ll say, “It’s another level. You have to give yourself goals in order to make it here, but you have to go out there and work hard and earn it. It’s going to be difficult at times, but I can’t lie, I’m excited.”

As the smile spreads across his face, you realize that Antoine is a 20-year-old man living a dream, happy just to be here, but not satisfied. Not yet. He’s the one rookie that truly wants to run the NBA. He wants to rejuvenate the Celtic legacy. Championships in droves. Winning the jewels last year in Blue Heaven spoiled him. That’s the difference. Being a part of an NCAA championships program is something neither Bias or Lewis were able to claim.

He’s also got that arrogance. “It’s not arrogance, man!” he insists. Yet he’s got that arrogance that anybody who’s gonna make it, needs in order to make it. The Celtics need it. They miss it. There used to be no such thing as a Boston player without arrogance. That’s why you hated them, that’s why they were so loved.

Ask Antoine what would have happened if he’d stayed at Kentucky for one more year, he’ll say, “We probably would have been ranked No. 1 in the country and had a good opportunity to win back-to-back.”

Ask if he would have been first-team All-American, “I think I would’ve gotten that status.” But he’s quick to tell you that “going top 10 in the draft, you can’t turn down an opportunity like that.”

Ask him, flat out, if he was the best player on that team last year (a team that not only won the national championship but also had three first-round draft choices): “I think I was, just because I brought a lot of things to the table. Not necessarily more than anybody else, but my size kinda made a difference. Being able to handle the ball and pass the ball made the team more versatile. It just made a lot of things easier for a lot of people. I mean we had a lot of talented players, I don’t know. A lot of people will argue, but then you can always throw in their face who went highest in the draft.

“No, you’re getting me hooked up in this,” he continues. “I’m not arrogant, but I do have a lot of confidence in my ability and in myself. And you’ve got to have some type of cockiness about you; I don’t think you can make it in this game without it.”

Someone who didn’t know Antoine asked me to explain him. The only answer I could give them was so simple, but so descriptive, they couldn’t understand. “He’s from Chi, that says it all.”

Two 6-10 brothas with games of fluid. Milky. Pour it on your cereal. Both have that old-school work ethic and approach to the game that so many are missing. Days later I tell ‘Toine this and he laughs, softly.

“Yeah, I see the similarities, but Juwan’s an inside player, and I think I can do more things with the ball than Juwan. I don’t know, I need at least a year under my belt before I get into all of that. It’s funny, right now people give me a lot of credit for making it. But I’m not just trying to make it, I’m trying to excel in the NBA; making it is not good enough for me.”

It never should be. There is a thick clientele of Chicago ball players that just made it and didn’t do anything once they got there. This is what drives Antoine Walker to be better than his teammates, to be arrogant. He is that good. The past two summers in Chicago he has ruled the Pro-Am, leading the league in scoring at about 35 points a pop.

Then, when he’d roll back to Kentucky, he’d tone everything down and play for that one common goal. Let the points drop, pick up on the assists and rebounds, cut down the turnovers, cut down the nets.

The beef starts early. You know something is going to happen soon. Real soon. Maybe it’s the heat. In an overcrowded gym laced with ego and touched with pride, someone is bound to snap. Crackle. Pop. Timmy Hardaway sits on the bench, in eyepatch and sunglasses, watching everything as it goes down. Juwan Howard is maxed out on the floor behind the basket, back against the wall, legs stretched out. Randy Brown is laughing. And Snake (Ken Norman) is drippin’ sweat, waiting for the rent-a-ref to blow the whistle.

A coach, dressed in Karl Kani shorts, soft-link bracelet and Air Max 2000’s, tosses anger toward blue heaven. In a typical, don’t-play-yourself move, Antoine Walker leans right, bolts left and goes baseline. The crowd goes for the move. The oohs. The ahhs. Walker’s airborne. Blue Heaven. A soft release off the glass, misses. At the other end, Michael Harmon drops one from 17. Antoine’s pissed. As he runs back on offense, coach “Kani” lets him have it. The verbals. An opposing summer-fling coach telling a future NBA player his game is off. Even weak.

How does a young man respond? If you are Antoine Walker, the best player on the NCAA champions, high first-round draft choice of the Boston Celtics, Sports Illustrated’s “Blue Heaven” coverman, former Mount Carmel HS All-World, you do this: Glance at the coach giving you grief as you cross half-court with the ball, embarrass the defender checking you with a between-the-legs crossover that leaves him all shook up like Elvis, take three other men to the hole for the dunk. You never take your eyes off that coach. Make his head drop. Acton speaks louder than words. Too bad Len’s not around to see it.