The Shady Past of Nets’ Potential New Owner 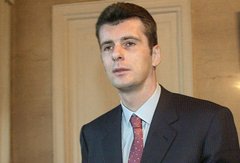 Let’s be honest: New Jersey isn’t exactly unfamiliar with shady characters, but those guys at least have the decency to commit their crimes in NJ. But, when foreigners with sketchy dealings try and get a piece of the pie, well, we simply can’t have that now, can we?

Last week, it was reported that Russian billionaire Mikhail Prokhorov was close to buying a major stake in the New Jersey Nets franchise. Should Prokhorov get his way, he will have a major PR battle on his hands.

Prokhorov, who reportedly could also take over a majority stake in the team if a deal is reached, was arrested in January 2007 while on vacation at a French ski resort when police cracked down on a suspected prostitution ring. According to numerous reports at the time, Prokhorov told investigators that he flew beautiful women in from Russia because he enjoyed their company.

However, investigators suspected that Prokhorov had supplied the women as prostitutes to his wealthy friends and kept the billionaire in custody for several days before releasing him and dropping the charges. Prokhorov later told the French press that “my winter vacation in France was spoiled by local police, who arrested me and my friends without giving any reasonable explanations.” A Ratner spokesperson refused to comment on Prokhorov’s controversial past.

It’s not all bad news, Nets fans. Besides the fact that charges were dropped following his arrest, Mikhail Prokhorov is a very tall man (6 foot 9, according to the linked article.)

So, he may have a suspicious past, but at least the man could get out there and grab a rebound or two for the team. That has to count for something.