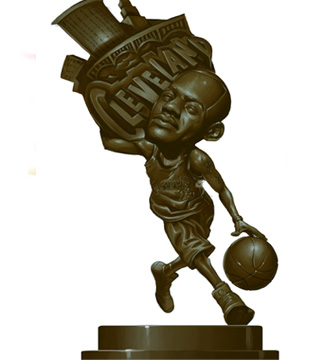 I know the Bulls are the trendy pick in the Central, but the Pistons have too much pride to just roll over and give up. They’re without Ben, sure, and I’ve never been a Flip Saunders believer, but I think they have one more year in them, with probably 55 wins (which will be enough to win the hard-fought Central). Rip, Chauncey, Sheed and Tayshuan now have their chance to show us that they can play defense without relying on Ben to have their backs.

The Bulls will be better than they were last year, but Ben Wallace is still talking about needing touches on offense and wanting to shoot the ball more, and he’s not going to thrilled when Ben Gordon takes his twentieth shot of the half. I also wonder how much longer Scott Skiles and his tough-guy act will last with these guys.

He’s got the whole world — or at least the city of Cleveland — on his shoulders, and thus far, LeBron’s never backed down from a challenge. They’re already pumping him up as a legit MVP candidate in the Cleveland papers, and I’m thinking that’s not far from the truth. But he still needs help. The other thing that bothers me is how much better the Cavs played without Larry Hughes last season during the Playoffs.

The Pacers haven’t had a drama-free season in recent memory, and that’s not changing going into this year. They have good players, a good coach, a good GM…but it just doesn’t seem to fit together, for whatever reason. And what happens if Stephen Jackson is convicted of a parole violation halfway through the year?

Finally, the Bucks. I understand the thought behind moving TJ Ford for Charlie Villanueva — going older for younger, smaller for bigger — but I don’t think a Steve Blake/Charlie Bell combo has anyone shaking in their boots. Now Bogut’s hurt, Villanueva isn’t playing particularly well, and Terry Stotts is still the coach.