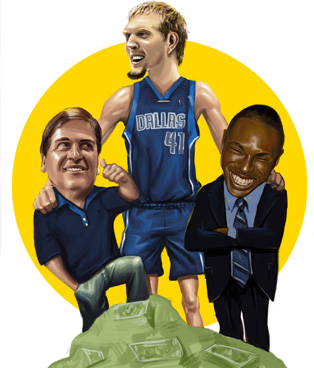 By now we’ve been through all six divisions (which you can check out here: Atlantic, Southeast, Central, Northwest, Southwest, Pacific), and now it’s time to settle on our NBA Champs. I wrote much longer about all this in the current issue of SLAM on newsstands now, but for now, let’s go through the contender pretenders…

• Chicago — Honestly, I wasn’t even thinking the Bulls belonged in this conversation a month ago, but they looked good in the preseason and looked amazing against the Heat. My issue with the Bulls is the same issue I have with the Suns, which is that when things slow down during the postseason I’m not sure if they have enough low-post scoring to get by. They also don’t have as much postseason experience as a lot of these other teams.

• Detroit — Second-best team in the East, I think. But there’s already a lot of grumbling coming from up there, and I find it hard to believe Big Ben was the only guy holding a grudge against Flip Saunders. Which reminds me, last season I picked against the Pistons because I didn’t think Flip was much of a postseason coach. Nothing’s happened since then to change my mind.

• Miami — The Heat look horrible, just horrible last night, but I’m not worried about them. They’ll coast through the regular season, get into the playoffs and turn it on. I think it’ll work in the East, and they’ll make the Finals. But…

• San Antonio — You guys know how much I respect the Spurs and everything they do, but I saw enough of Jackie Butler last season with the Knicks to understand that the two-headed Elson/Butler monster won’t strike fear in many Western Conference hearts. I do think they could make a run, though, but everyone is going to have to be healthy, and that’s no small order.

Which leaves the champs…

The Dallas Mavericks — I have a gut feeling about the Mavs, so I’m going with it. They made the Finals last year, where they got their butts handed to them by the Heat, and my thought is that they learn from that, they adjust, they make it back and win it all.

And if not Mark Cuban buys them all fake rings, anyway.