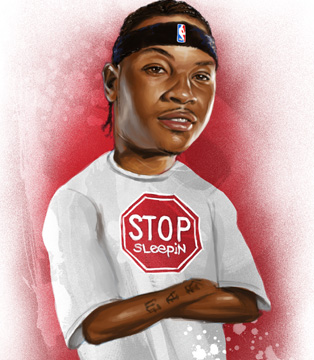 Could this be the worst division in the NBA this year? I think that’s a very real possibility. The one team that I feel safe in saying should win at least 50 games and coast into the postseason is Denver, led by my man Carmelo Anthony. I talked to someone close to Melo the other day and they mentioned the possibility of him leading the NBA in scoring this season, because his game just continues becoming more and more complete. You might prefer a different player, just stop sleeping.

Ah, Utah! Jerry Sloan is fired up, the Jazz have Kirilenko healthy again and Deron Williams quietly put together a solid rookie year. I also really like Memo Okur, who has been consistently underrated. I’m not sure how Ronnie Brewer will fit in here, but he might have been my favorite lottery guy from this year’s Draft–I’ve always found him a very complete player.

The last few weeks, reading the T-Wolves stories in the Minnesota players, there’s always a lot of stuff about the Wolves hoping so-and-so develops into a three point threat or that so-and-so will turn out to be better than they expected. Say this for them: There’s really no expectations, so all they can do is go up.

I know Portland still gets hated on a lot, but I like Nate McMillan, and I like the way they’ve settled on Jarrett Jack as point guard and Brandon Roy as their two guard. They’re going to build around these guys, but until they do something with Darius Miles and Zach Randolph, it’s like there’s two teams there.

I feel bad for the Sonics fans, because their starting center tore his ACL and the team might be gone a year from now. It’s not a healthy situation for anyone involved.