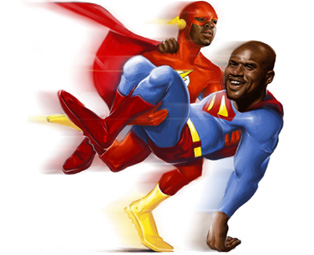 How I picked it in the magazine:

To begin with, I picked the Heat to not only win the division, but to make it all the way back to the Finals. They’re returning everyone, Pat Riley seems like he’s still having fun, and D-Wade has now assumed control of the Heat (as the drawing suggests).

I’ve always been an Eddie Jordan fan, but I can’t figure out why the Wizards never go out and make that one big move to put them over the top. Sure, Gilbert is great and Antawn Jamison is perennially underrated, but if they want to win a title, I don’t think it’s happening with Etan Thomas and Brendan Haywood battling it out for the starting center spot.

Orlando’s an interesting team. Dwight Howard remains my main man, but he needs some help down in O-Town. They went on that insane tear at the end of last season — winning 12 or their last 15 — and they still finished with just 36 wins. Maybe Darko will turn it on, or maybe Carlos Arroyo will play he plays for Puerto Rico. But as they stand now, they’re still not quite ready to be big time players.

ATL, shawty! I made the Hawks one of our Wild Card Teams, meaning I have no idea what they’ll do. They could win 40 games, they could win 20 games, and I won’t be surprised either way. I do think they could end up ahead of the Magic, but I left them in fourth to be safe. Keep an eye on Marvin Williams, though.

Finally, the BETcats. Michael Jordan might be in charge now, but Bernie Bickerstaff is still the coach, and their most potent offensive player is a rookie with a bad mustache.