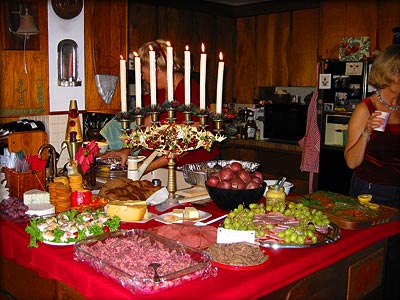 There are a bunch of interesting things happening around the league, let’s take a look at a few…

The new rules (with an added touch of crazy)

According to Mitch Lawrence (whose profile picture I thoroughly enjoy, by the way) of the New York Daily News, the NBA had a newly minted fashion-police official at the Knicks/Wizards game this week to keep an eye on which players didn’t properly tuck in their jerseys, those wearing rubber bands with their names on them, and the dude was even keeping tabs on the infidels who dared to chew gum or (gasp!) fidget while standing for the national anthem.

Man, it’s too bad Mahmoud Abdul-Raouf is no longer playing. These guys would have gotten along just swimmingly.

The news of the Grizzlies fan who’s suing Kobe for allegedly throwing an elbow at him while chasing a looseball got me thinking about who else should get sued by fans of the game. Here’s the abbreviated list:

-Michael Jordan: Marv Albert should have sued him for making him nearly pull a hamstring while announcing his famous move from game 2 of the ’91 finals: “A specTHHACULAR move!!!”

-Current and former members of the Knicks: the Knick fan base should go after Charles Smith for missing all of those layups in game 5 of the ’93 ECF; Isiah Thomas for being himself; Larry Brown (see previous); James Dolan (see previous two); Spike Lee for not fixing this mess; John Starks for the bricks in game 7 of the ’94 Finals; Bernard King for getting injured; Gerald Wilkins for not being Dominique; and finally, David Stern for not rigging the LeBron draft like he did the Ewing one.

-Miami Heat regular season ticket buyers: for having to endure this team until playoff time.

(You guys can surely think of a few more in the comments section.)

According to a Hoopsworld article from earlier this month, the NBA wants YouTube to take down all NBA-related video content due to copyright infringement concerns. If there is any truth to this report, it would be one of the dumbest things the League has ever decided to do. Yes, I realize that they want people to go to NBA.com, and that’s just good business. But if fans of the game want to promote it through highlight videos and mixes–some of which are wildly creative–and do it all for free, no less, why in the world would you not embrace it? Makes no sense to me.

Imagine if Honda said that their clientele were no longer allowed to customize their Civics because they don’t want anyone tampering with the original product (which is basically what mix makers are doing with NBA videos), would this make any sense whatsoever? Of course not. I don’t get the people who run this league sometimes.

I’ve already addressed this on Bench Renaldo (a name which is becoming more and more ridiculous) but I thought it was worth re-hashing here. If the ASG were to be played this weekend, here are the starting lineups I’d want to see out there:

-Joe Johnson : quite possibly the most enjoyable player to watch so far this season.

-Michael Redd : when you drop 57, you get an invite to the dance, it’s that simple.

-Dwight Howard : the takeover has begun; Shaq who?!

-Carmelo Anthony : should have been at the dance last year.

-Yao Ming : best center in the universe for the last two years.

Funnest teams to watch so far this season

Most depressing teams to watch so far this season

Houston (situation so depressing that T-Mac is contemplating retirement once his current deal is up); Detroit (treating every game like a visit to the dentist); Boston (don’t let the mini winning streak fool you, this is a very bad team); Washington (even the immortal Gilbert hasn’t been able to turn them into a fun team to follow); Toronto (Sam Mitchell must own incriminating photos of the team’s executive brass).