The Struggles of one Ray Allen, Under the Microscope 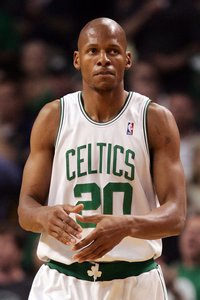 Ray Allen’s performance against the Cavs in the East Semis has led some to question the validity of the nickname “The Big Three”. It’s been more like the “Big Two and a Half”, as Allen has struggled mightily with his shot, and couldn’t score more than 10 ppg and shot well below 40% against Cleveland.

Allen and the Celtics know full well that he can’t afford to have a similar series against the Detroit Pistons.

“I think personally it’s tougher than anything I’ve ever seen,” he said yesterday after practice. Allen spent extra time launching 3-point shots from various spots around the arc.

“Just looking back on the times we played Cleveland throughout the year and in the series, I think they did everything they could to try to take away anything that I have. They made it tough for me to create any type of rhythm out there. Kudos to their game plan. They made it tough on a lot of us.”

Allen and the Celtics had better hope the hard work pays off in the Conference Finals. Because as much fun as it is to blame Doc Rivers for the team’s shortcomings, it’s inevitable that the finger will soon begin to point elsewhere should they continue.