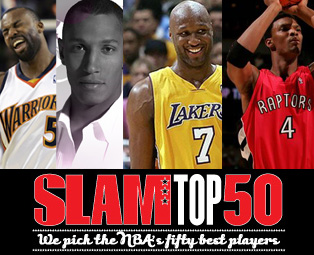 The SLAMonline top 50 list ran all summer long, producing some heated debates along the way. Did we make some mistakes along the way? Sure. But for the most part I am comfortable with it. After absorbing the shots taken in the comments, I took a look back. If I don’t comment next to the player’s name, that means I am perfectly fine with where we’ve placed him.

My top 10 regrets for being on the list at all or coming in way too high/low low are:

Guys I wish we included:

And there you have it. Enjoy that “mea culpa” as they say, on Thanksgiving.

Feel free to comment down below or to head over to our message boards and keep this timeless debate going.