The ultimate insult to David Lee 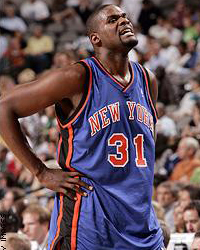 David Lee has been having a monster season that could net him both 6th man of the year and most improved player. He should be starting, and Isiah’s reasoning for not putting him in the lineup has been something to the effect of David being so great off the bench, why tamper with a good thing? Well… when David was forced into starting duty following the brawl suspensions, he responded with 19 and 20 rebound games, not to mention the game winning pass to beat Utah and the 0.1 tip-in to beat Charlotte. David doesn’t seem to mind coming off the bench, which is nice to hear. He’s been backing up the likes of Jared Jeffries, probably because of his contract and Indiana University background, and Channing Frye, who appears to be a lot more high maintenance than David. Okay, those aren’t really acceptable reasons but I’ll let them slide.

Isiah’s latest move has been inserting JEROME JAMES into the starting lineup. He’s one of those NBA players that I don’t even make fun of anymore cause it just feels mean. Last year I saw Jerome in the locker room with his shirt off and I just could not believe he was a professional athlete. You’d think that someone who must at the very least, jog a few laps to get ready for practice, would be in better shape. It was not a pretty sight. We’ve made every Jerome James joke there is to make. Over the summer I interviewed Luther “Uncle Luke” Campbell for SLAM, and him being a booster for The U, he promised me that he would get Jerome into shape and silence all the haters calling him a bust. It was tough to keep a straight face while an icon from my childhood was saying something so preposterous to me, but I somehow managed, and have secretly been cheering for the Jerome James revenge tour.

He’s not the worst player in the whole NBA, which is an improvement over last year. His contract was a joke from the start, and I guess this could be Isiah trying to keep his confidence up, since Lee will produce no matter when or how he’s used. Maybe the distinction between starters and bench players is overblown, though Frye sounds geniunely upset about being demoted. The Knicks keep falling behind early, and that’s because they do not have their best players on the floor at the start of the game, while their opponents typically do. Whatever Isiah’s bizarre logic is in making this move, I really hope he doesn’t lose David Lee to frustration. I mean, if he meets someone at a party and they ask him what he does for a living, he might answer “I back up Jerome James.” Don’t expect this arrangement to last much longer. Come on Isiah, give the people what they want!!!