The Waiter ends his shift 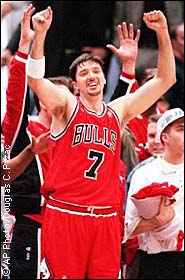 My three favorite nicknames in NBA history are Vinne “The Microwave” Johnson, Chris “Birrrrrrdman” Andersen, and Toni “The Waiter” Kukoc. They called Toni the waiter cause he served ’em up. Now he’s retiring.

He is a three-time champion that hit big shots, including the one that Scottie wasn’t allowed to take. He had less muscle definition than Vlade Divac and one of the worst tattoos in NBA history, and he was fun to watch. Check out the second play on this clip.
He came to the NBA expecting to play with MJ and Scottie on a superpower team, but then MJ left, and there was nothing but jealousy of his contract. Phil let him take a bunch of those turnaround jumpers to win games in he ’93-’94 season, and it blew up on that infamous night. Toni did what he supposed to do, and won the game. He was a hero that got lost in the controversy of that night.

When Jordan came back, Toni played his role and even though some thought he was too soft, he learned how to hit those open threes, and for the most part he reigned in his game as the dynasty rolled over the league. For a while he was the best sixth man in the game on the best team. Honestly, most people probably didn’t realize he was still in the league, so this would be the appropriate time for him to hang them up.

Don’t forget to tip your waiter.