The Warriors Stage a Love In 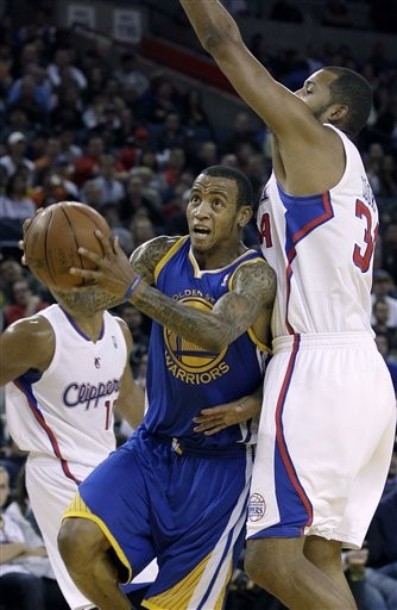 Longtime Warriors center Adonal Foyle once said that an NBA team is like a Petri dish. You throw everybody into a confined space for a year and wait to see how the chemistry experiment turns out. After winning the first two games of the season for the first time since 1994, this year’s Petri dish doesn’t have the smell of a winner yet, but the stench of a mostly turbulent 15-plus years seems to be lifting.

With new ownership seemingly imminent, a new coach who was a popular assistant and a horde of new players ready to listen, the Warriors are showing more unity than they have since the “Believe” team.

They kicked off the season by taking Monta Ellis to dinner for his 25th birthday, which also happened to be the night before their first game. The Mississippi native was treated to an upscale soul food meal at 1300 Fillmore, which wouldn’t be unusual except that nobody could remember the exact date of the Warriors’ last team meal.

Veteran Vladimir Radmanovic had not experienced a team dinner as a Warrior since arriving early last season in the Stephen Jackson trade, but notes that successful NBA teams often build relationships by breaking bread.

“When I was with the Lakers, we had many team dinners,” he says.

Unlike past Warriors teams, this group is anchored by veterans whose leadership style — with the explicit encouragement of management — breeds camaraderie.

“We go out whenever possible,” says Charlie Bell, the 31-year-old guard who has emerged as a team leader. “On the road, if guys don’t want to come out we make them go out. This is the closest team I’ve ever been on as far as the whole group sticking together.”

But the most important addition to the 2010-2011 Petri dish has been David Lee.

“He’s brought a lot of leadership,” says Warriors assistant coach Calbert Cheaney, who formerly played for the team. “We have a lot of quiet guys here, but he is very engaged and very vocal.”

That was evident during Friday night’s win over the Clippers, during which Lee gave Warriors center Andris Biedrins a hug during a timeout. Revitalizing Biedrins, who went into a multi-year tailspin during the Don Nelson era, is crucial for the Warriors, and Lee wanted to keep him positive after he got into foul trouble. So he gave Biedrins a hug — not a “Let’s put our forearms between our chests and sort of hug” hug, but more of an “I’ve got your back, bro, so I’m going to throw an arm around you until we’re borderline verklempt” kind of hug.

“He’s helping Andris and getting him back to where he was two or three years ago,” says Cheaney. “They’re always lovey-dovey. It’s great to see.”

Even the sometimes sulky Ellis seems buoyed by the positivity. But Cheaney and the veterans know that bromances alone aren’t the only reason for team’s improvement, nor will they be enough to push the team into legitimacy.

“The fact that David brings rebounding is also very important,” Cheaney says. “We were near the bottom in rebounding margin last year.”

The team has also been terrible defensively for the past several decades, and often reverts to form. Every player in the locker room voices a commitment to team defense while also admitting they have a long way to go, despite the early wins.

“It’s going to take time,” says Radmanovic. “There are a lot of new guys on the team and it’s going to take some time to figure out what everybody is supposed to be doing. But I don’t think it will be too long, because you don’t have too many chances in the NBA to figure things out.”

But for now, early in the experiment, the Warriors seem to be building a much better culture.

Game Notes
-Lou’s Book Club: Talk for a few minutes with Warriors forward Lou Amundson and you’ll quickly learn he’s an avid reader. Amundson, who studied philosophy and English at UNLV (graduating cum laude), has kindly agreed to recommend one of his current favorite books every other week to SLAMonline. This week Lou recommends Open, the autobiography of tennis star (and Las Vegas native) Andre Agassi. “It explains a whole lot of what went on behind the scenes of those big matches,” Amundson says. “You remember watching the matches as a kid, and then you read what the experience was like for him.”

–Stephen Curry has been bothered by an ankle sprain since the preseason, and also sprained an ankle during Team USA tryouts. It’s easy to wonder if he’s impacted by wearing Nike Hyperdunks, an earlier version of which were associated with the Detroit Pistons’ string of ankle injuries last season.

-The cheers for rookie Jeremy Lin have been so loud that some have compared them to the cheer that went up after Baron Davis’ epic jam over Andrei Kirilenko in the 2007 playoffs. Lin was born in nearby Palo Alto but his parents are Taiwanese, and he has been a sensation in the Asian community both in the U.S. and abroad. Asian Heritage Night drew 800 people last year, but 2,000 on Friday night and a large foreign media contingent to see his first NBA appearance. Coach Keith Smart mercifully waited until the team’s first road game Sunday against the Lakers to give Lin his first extended run — and the Harvard grad performed well.

–Blake Griffin isn’t the only young Clipper showing promise. 2010 first-round picks Al-Farouq Aminu and Eric Bledsoe look like the real thing and could be the future core of the team.

-The Warriors punctuated this year’s home opener extravaganza by lowering a miniature version of the Golden Gate Bridge from the ceiling of the Arena, which the players ran through during introductions. Nigel Tufnel immediately threatened to sue.