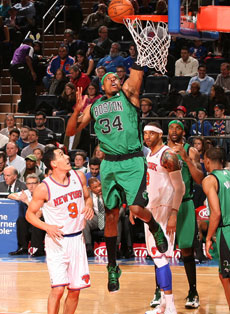 Since Miami’s season-opener against Boston, it’s been nearly a foregone conclusion that the reigning Champions would headline the top-tier teams in the NBA en route defending their title. Eighty-two contests later, they have not disappointed.

Their dominance was on full display this season, crescendoing in a 27-game winning streak, and fueled by another MVP-caliber season from LeBron James. But royalty be warned, the path from the second round to the promised land will prove just as difficult, if not more so, than it was last season.

After the Heat, the Eastern Conference featured a crunched group of teams vying for Playoff positioning. When all the dust settled Wednesday night, we were left with first-round pairings of Celtics-Knicks, Hawks-Pacers and Bulls-Nets—all series that have intriguing rings to them. Let’s take a look at exactly how these teams size up.

These two teams simply can’t stay out of each other’s way. Somehow, even with the standings as crunched as they were all season, you saw this coming. It will be a little different than it has been in past years—the Celtics are much more accustomed to home court advantage, and the Knicks have consistently opened on the road.

But the intrigue in this series is derived from exactly that. The regular season is over, and the Celtics don’t care what their seed is anymore. The Cs have the hearts of Champions, even if those Champions are injured, greyed, or playing for Miami now. New York may have won the season series 3-1, but don’t expect Boston to care about that either.

“We can’t go into [a series] saying we are looking for revenge,” says forward Terrence Williams. “We look to beat whoever we are playing, even if they haven’t won against us recently. That feeling only gets stronger come Playoffs. That said, there’s always a bad taste left when somebody beats you; you do whatever you can to avoid it happening again.”

The Celtics are littered with Playoff and championship experience, something that the Knicks cannot claim. The perspective that comes from that experience, coupled with the hunger that comes from 1-3 record this season against New York, are probably Boston’s two most dangerous weapons in the series outside of Paul Pierce, who is known to harness his Hall of Fame ability almost on command come postseason. For that, the Celtics may pose the biggest threat to the Knicks, outside of Miami.

For all of the veteran calm the Celtics exude, the Knicks have not been in this position in a long time, and they are well aware of it. Madison Square Garden hasn’t hosted a Game 1 since Toronto came in to kick off a best of five series during the ‘99-00 season.

“I’m extra excited to be opening up the series at home. No problem admitting it. To be in front of that home crowd to open up the Playoffs, that’s gonna be a great moment,” says Iman Shumpert.

Still, they realize that this team’s overall goal is to win a Championship, and they need laser-sharp focus from the start. “It’s going be a hell of a battle with Boston. Those guys are physical, those guys have a Champion’s heart, and we know they always get up to play us.” says Shump.

Keeping excitement under control will be paramount for the Knicks, because ball control and turnovers, or lack thereof, are key to how they will fare in this series.

“Coach has driven home the importance of keeping our turnovers down all season,” says Shumpert. “It’s no secret that we shoot the ball a lot, and the fewer turnovers you have, the more shots you can attempt, the better the chances are that we have the lead at the end of a game.”

This series doesn’t have the flair that New York-Boston does, but its interest draws from something much more tangible—these two teams play almost completely conflicting styles of basketball. The Pacers are one of the biggest teams in the NBA from a size standpoint. They defend and dominate the post play in order to win their games. They are strongest in the halfcourt.

“There is so much more to winning basketball than big vs small. You have to be who you are. No matter what style of team you are going up against, in the Playoffs, it’s all about the little things, the level of execution. That will have more of a say on who wins this series than big vs small,” says Pacers coach Frank Vogel.

The Hawks on the other hand, are one of the smaller, quicker teams in the League, and are at their best when they have the opposition out running. They have a good transition game, and also rely on speed to play disruptive defense and execute tight passing on offense.

“We push the ball. We get out in transition very well, and also play defense at a high level, disrupting opposition pass play and all that. It’s probably what every team in the NBA wants to do. We do it very well,” says Hawks guard Anthony Tolliver.

The victor of this series will likely be decided by who plays their game at a higher level more consistently throughout the series, and also hinges on who best counters their opponent’s style of play. And that’s what will keep it so damn interesting. Execution—it’s so common it has become a cliché—truly is what separates winners from losers this time of year. As should be the case in the postseason, both squads are confident in their ability to contain the other’s strengths.

“Smaller teams [like Atlanta] pose their own difficulties, playing smaller and being as quick as they are, but we don’t plan on making any adjustments. We will make them deal with us and our size. We are confident that our bigs can handle some of their smaller guys. As long as we keep them out of the paint and make them shoot from distance, we will give ourselves a chance to win,” says David West.

“We defend big guys pretty well. So we’ll see if they are able to match our speed. If not, I like what we should be able to do. Otherwise, it will be an excellent series,” says Jeff Teague.

Beyond what makes these two teams opposites, they also have one big factor in common: Neither teams played exceptionally well down the final stretch of the regular season. Indiana lost five of seven in April, and Atlanta dropped five of eight in April. Some of that can be explained away by injury, but neither team will tell you they liked how their season ended.

“Our pick-and-roll game has slipped a little bit in the last few games. We need to get that back in order. Other than that, running and passing are the keys to our offensive success,” says Indiana coach Vogel.

Kyle Korver offered a similar assessment of his Hawks: “The last couple of weeks haven’t been our best basketball; we need to get back to playing the kind of basketball that we were playing around the All-Star break moving into the Playoffs.”

They say the seeds closest to each other are the most evenly matched opponents. It will be tough to argue that mantra in this series.

Especially coming down the stretch, Brooklyn’s offensive game has been something to see. Deron Williams formally reclaimed his superstar status, and Brook Lopez has emerged this season as one of the premiere centers in the League. Joe Johnson (and his buzzer-beating antics) and Reggie Evans have helped keep the ship on course to Brooklyn’s 49-win season. But Williams and Lopez have absolutely been the difference makers all season. Now, they have both gotten hot at the right time, and look to carry their streaks deep into the postseason.

“Deron and Brook are our main guys. They’ve been scoring for us and winning games for us all season, and have been hot coming down the stretch. That has to continue going into the weekend, and we will be in good shape if it does,” says Tyshawn Taylor.

That is all well and good, but there is an immovable object in this equation, and the Nets will have to perform at a very high level to score consistently on one of the best defensive and fundamentally sound teams in the Eastern Conference.

“Chicago is a team that is going to make you work for everything you get. They are very sound defensively and in their rotations. They are excellent at converging on the ball. They try to make you beat them over the top with jump shots and contested shots,” says Brooklyn veteran forward Jerry Stackhouse. “I don’t think we have a huge margin for error against a team that makes as few mistakes as the Bulls do. We have to take advantage of home court, and play at a high level.”

As far as the Bulls are concerned, they will take the compliments, but will still look to show Brooklyn just how right they are about them. Their defensive prowess is only one of two reasons the Bulls have earned the moniker “unmovable” this season.

Former MVP Derrick Rose, who went down with that infamous ACL tear in last year’s Playoffs, has even more famously still not returned to the court this season. Bulls have secured their position in spite of an entire cast of player’s absence from the battlefield at various times this season. Chicago handles injury better than any team in the NBA, and with that distinction comes an expectation for them to carry on.