Their Time Is Now 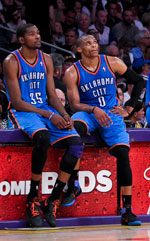 There’s a party going on in Oklahoma City, one that’s been raging for weeks and it’s been happening for all the basketball reasons expected and otherwise.

The most basic of these occur for the same reasons fans of eight major professional sports franchises celebrate every year: their team is going to play for a championship. The more exotic stem from possibilities, from what this Thunder team stands to accomplish if everything continues to break right. It lies in narrative, the put up or shut up Heat matching wits with the Jordan-ic dynasty of the next decade, a Big Three pitted against its youthful doppelganger. We are being told to expect one of these teams, depending on the result, to potentially face dismantlement while the other is built to endure for untold more treks deep into June seeking championship glory. The Heat may not have another shot at this moment; the Thunder may not be beaten for the next decade.

It’s all one big lie.

Here’s what isn’t, Thunder fans. You are going to watch, at minimum, one of core four members James Harden and Serge Ibaka walk out the door before their 26th birthday. There’s a possibility it could be both. A team constructed for endless tomorrows could very well never be better than it is today, and a team of 22- and 23-year-olds that both conventional wisdom and NBA history dictate should be years away from their best crack at a title may never have a better opportunity than it will over the next two weeks.

What I’m saying is that this team—as presently constructed in all its youthful, terrifying, above-the-rim ferocity—has a scant three seasons left to live, breathe, and play together.

The majority of you likely don’t believe this. Those who do probably are angry, bitter toward a collective bargaining agreement jerry-rigged to stimulate competitive balance that instead, ironically enough, is the likely harbinger of your small market team’s eventual dismemberment. Some you are feverishly running through scenarios in your heads for how an amnesty here or a hometown discount there can keep all of the key players aboard this archipelago for the duration of their careers, while others are depressed because they know that these players’ prime years won’t be spent together in a Thunder uniform. Lastly, there are those who have come to grips with all of this and understand that while the team’s peak could be now, there’s no reason to expect them to fade away from title contention so long as Kevin Durant and Russell Westbrook are plying their trade in OKC.

What you’re all experiencing, as you prepare for that period of eventual mourning, is the five stages of grief.

“I’m not buying it. The front office will be able to pay all of them.”

The easiest way to get past this stage is to do a quick crunch of the numbers, because once that happens, the question no longer centers on the likelihood of this all occurring but instead why everyone’s ignoring that elephant wedged between the coffee table and TV in the dead center of the room.

• Westbrook’s new five-year, $80 million contract extension kicks in next season. While the yearly breakdown of the contract is not yet known, even a staggered financial payout makes it difficult to envision the combined annual commitment to him and Durant going any lower than $29 million in any one season – and a maximum that could push $40 million.

• This season’s salary cap stood at $58 million. Under the terms of the new CBA, though, that number will drop on account of the cap being tied to the players’ aggregate salary, something that will plummet from 57 percent of league revenue to anywhere from 49-51 percent as soon as next season. Had that been applied this season, the cap would have been $51 million.

• The luxury tax stood at $70 million this past season. Like the salary cap, the overall tax line will fluctuate depending on league revenues but even the more optimistic projections don’t have it going much beyond $76 million in 2013-2014.

• Why is ‘13-‘14 important? Because that’s when the newer, nastier luxury tax kicks in. Under the old CBA – and through next year – teams pay $1 for every $1 they go over the tax line. In the new system, it’s an incremental increase for every $5 million over ($1.50; $1.75; $2.50; and so on). The fun really begins, though, if a team is labeled a repeat offender by paying the tax in four out of any five seasons because, should that happen, $1 is added to each of those numbers.

• It gets worse. On top of the new luxury tax being dramatically more expensive, it also comes with roster restrictions that the old one didn’t have, including a smaller mid-level exception, no biannual exception, and a reduction on the amount of salary a team can take back in a trade. Moreover, beginning in ’13-‘14, any team more than $4 million over the salary cap cannot perform a sign-and-trade. More than ever before, heavy spenders will be locked into their rosters with precious little escape.

• Both Harden and Ibaka will be eligible to sign extensions in two years, and able to test the open market in the season after that. Which, if you’ve been connecting the dots, means both are going to get paid at a time when Durant is not only due $20 million the following year but also staring down the barrel of a new max contract; when the team will almost assuredly be over the cap on account of filling out a roster around a massive salary commitment to Durant and Westbrook; and when the new luxury tax is in full effect.

• Here’s a quick exercise. Take stock of the league’s top tier of shooting guards. Eliminate the over-30 crowd (Kobe, DWade, Ginobili, Joe Johnson). Remove the one coming off a major injury (Eric Gordon) and the one who just signed a long-term contract (Arron Afflalo). Still with me? Great. Now try to articulate a scenario in which Harden doesn’t get a max deal considering the leap his game took this year at age 22, the untapped potential he could have as the centerpiece or second banana instead of the third option in Oklahoma City, and the total lack of proven young talent at shooting guard.

• Short of a major injury or an unexpected regression in his game, there isn’t one.

• This past offseason, Nene signed a four-year deal that nets him $13 million per season while Tyson Chandler inked his own four-year pact worth $58 million. Both players are 29 years old and have a history of major injuries.

Ibaka will test the open market at 25 and already has garnered a reputation as the league’s best shot blocker. He has yet to miss an NBA game due to injury.

You probably don’t need me to spell out the rest.

Point blank, there is no sustainable way to fit four max-salaried players on a team’s roster and stay under the luxury tax, let alone the salary cap.