They’re Doing It On Purpose, Shawn! 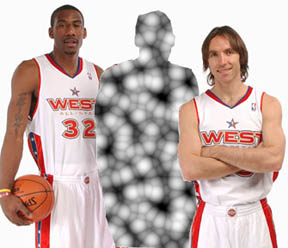 So, in the ongoing interest of delaying the actual MVP presentation until the end of time (or until Katherine Harris finishes validating the ballots), the NBA today announced the 2007 All-NBA teams.

Notable at a glance are the absence of Shaquille O’Neal (for the first time since his rookie season), LeBron’s second-team status, and of course the absence of Shawn Marion—despite the inclusion of both Steve Nash AND Amare Stoudemire on the first team, which may be the final straw that makes Shawn actually fight one of his own teammates in the middle of a playoff game. I wish I could feel sorry for Shawn, I really do, but last I checked he has a max contract (he’s actually the highest-paid Sun) and has been on the All-Star team, so I can’t feel that bad, actually. (I suppose it’s also worth noting that both Nash and Kobe Bryant received more First Team votes than Dirk Nowitzki, but seeing that you have to vote by position, it doesn’t really mean anything.)
Anyway, the teams:

(I still think voters should lose their rights based on ridiculous votes. Who were the three people who gave Shaq first-team votes?)