This is a Mock Draft! 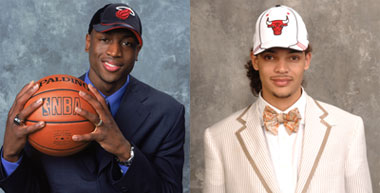 The NBA Draft is a basketball player’s most important rite of passage. It signifies everything. Going from amateur to pro. Poor to rich. Under the radar to global recognition. As much as they make us think otherwise, the Draft isn’t just a bad suit display. So can we please treat it with a little bit of respect?

We surf the sites just like you, and we’re tired of this Draft mockery. So we’re here to present our own Mock Draft—to make you fall back in love with the sport’s ultimate guessing game.

Surely, you’ve scratched your head at times, asking yourself these questions. Who makes this list? Do the Thunder really need to take another small forward with a top 5 pick? How does Earl Clark not get drafted in the First Round? Didn’t Patrick Patterson withdraw two weeks ago? Why is Omri Casspi’s name misspelled… in both the first and second rounds!? Is this just a bunch of guesses? What’s the point?

SLAMonline’s Mock Draft begins tomorrow, on the morning after the Lottery. You’ll soon find it’s the only Mock Draft you’ll want to follow. Here’s why:

This is an actual “mock” draft! One writer represents one team. The 24 teams in the first round have… 24 GMs.

Whoever is GMing tonight’s Lottery-winning franchise will make the first pick tomorrow morning. He’ll explain why he picked who he picked, how the player fits his team, other players he considered, etc. He’s going to thoroughly back up his selection—something “acclaimed” Draft sites always seem to conveniently leave out.

Once the pick goes live on SLAMonline, the GM with the next selection will begin deliberating. Every pick is chosen on the fly, under deadline pressure, and completely up to one GM’s discretion. One person for one team.

The process will continue six days per week. For five weeks. 8 o’clock on the tick.

When pick No. 30 rolls around, two days and handful of hours will remain until the actual 2009 NBA Draft. Our selections will be compiled into a master 2009 NBA Mock Draft post, complete with links to each player’s breakdown article.

This is a true mock draft!

On a dark day many years ago, mock drafters began to think it was a smart idea to call themselves “insiders,” as if they had information only team executives disclosed to one another. That completely changed what people expect out of mock drafts. No one knows for certain who a team will pick. We don’t tell the future. But we can recreate a Draft environment better than anyone else. We have the people. We have the knowledge. And we’re putting everyone together, thinking like GMs, every day, for 30 picks.

We promise only this: Our mock draft will be as thorough, entertaining and accurate as any other. When it’s all said and done, you will remember what “Mock” really stands for and why Mock Drafts are hella fun to follow.

Let’s break it down one last time. Good draft picks are born of two basic things: 1) Knowing team needs, and 2) Knowing the best available player. When it comes down to choosing the 1-through-30 this year, it going to be all about opinions. The opinions of 24 GMs. This is exactly how SLAMonline “mocks” the Draft!