A number of NBA All-Stars have a special relationship with man's best friend. 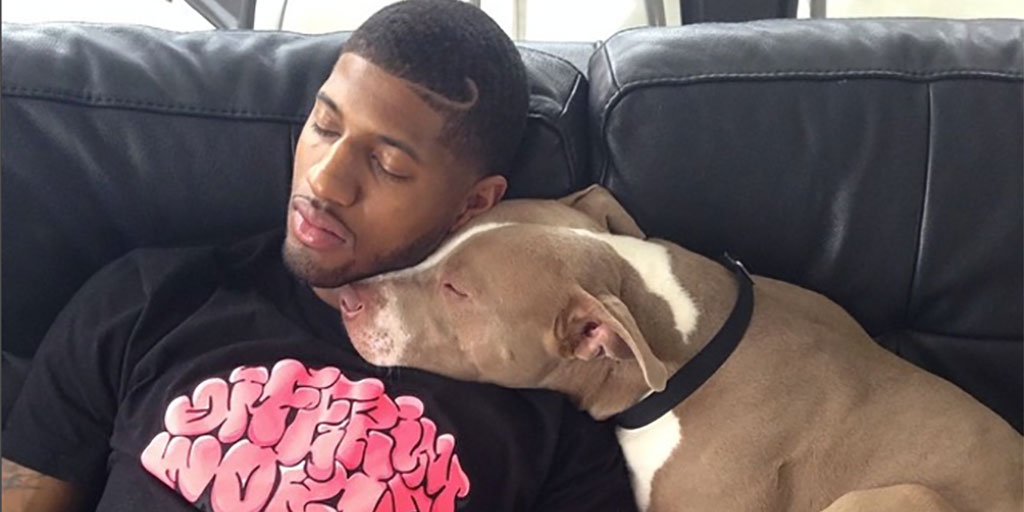 The number of pet owners in the NBA is growing. Between the #RaiseTheCat campaign in Philly, Danny Green’s snakes and an increasing number of dogs on social media feeds, the love for animals around the League is very real.

Inside the SLAM office, some of us tracked the story of Ben McLemore’s missing dog, Rolex, like Woj tracks a trade. Thankfully, the adorable Blue French Bulldog was found and returned to Ben unharmed. D’Angelo Russell’s dogs are staples on his Instagram stories. Kyle Anderson and his German Shepherds popped up on the Westminster Dog Show broadcast and Klay Thompson’s dog Rocco is a fan favorite.

We had to learn more about the connection between ballers and their dogs.

All-Star Media Day is a complete disaster, with an overwhelming number of reporters from all over the world asking a wide-range of questions that range from bizarre to corny. This, we determined, would be the perfect setting to ask players about their dogs, how they care for them, who watches their canine companions while they’re on the road and the most rewarding parts of being a dog owner.

“When I’m on the road, my wife is home and to be honest, he probably takes care of her a little bit more than she takes care of him. He’s kind of like our protector. I have two little girls and we got him so he could be there when I’m gone.

“My favorite thing about having a dog is probably whether or not I have a good game, bad game, good practice, bad practice, he’s always greeting me at the door and I love being able to go play fetch with him. He loves tennis balls and I’m a big tennis guy as well, so we go to the court and he chases the ball and it’s fun.”

Ever wonder what @JohnWall does in his downtime? Meet the pups that he hangs with at home. 🐶🐾 pic.twitter.com/ujwlZ6EqMU

“My dogs are doing great. I have three Pit Bulls and two little French Bulldog minis. My cousin (rapper WallWay Pack) and I take care of them. All my dogs are doing great—they are having fun, enjoying the house and getting ready for some warm weather. I took them to a trainer and had them trained, but I do a little bit at the house so I can get a little advantage on them.

“I just love dogs, man. It’s like having kids, and I don’t have any kids, I have a lot of nieces and nephews. It’s fun, I enjoy them. I always had dogs has a kid. I had Rottweilers and Pit Bulls.”

“I have a male Pit Bull named King—he is doing real well. Raising a dog has been awesome. I first got him when I got to the NBA and he’s been through seven years of basketball with me. He’s my best friend. It’s dope. I grew up with dogs my whole life so when I got a chance to be in my own place and wanted to keep that alive so my daughter would be able to get familiar with dogs, and they’ve grown together. They love one another. It’s pretty awesome to see her bond with a dog.

In case anyone is wondering, my dogs and I are having an outstanding offseason. pic.twitter.com/cCpdki0r8Y

“I have two Pit Bulls named Kane and Gotti. When I’m traveling, they stay at my house, I have people who stay with me and watch them. If they’re not around, I have arrangements with people who dog sit. Do I miss them? No. [Laughs] They drive me crazy when I’m home. Those are my guys, though.

“I grew up with dogs, I’ve had Pit Bulls my whole life. My favorite part about owning a dog is the bond and the loyalty between a man and dog.”

“I have two Bernedoodles [A cross between Bernese Mountain dogs and poodles.—Ed.] named Max and Molly. My agent has the same kind of dog. I used to go to his house and would hang out with his dogs—I really liked them. I enjoy taking care of them. My brother takes care of them when I’m on the road. Sometimes they’ll get into his room and eat stuff. I shut my door when I leave, and he doesn’t always shut his, so the dogs get in there.”

Peter Walsh is an Associate Editor at SLAM. He has a dog named Cooper. He’s a good boy.