This Just in: The Celtics Can Defend 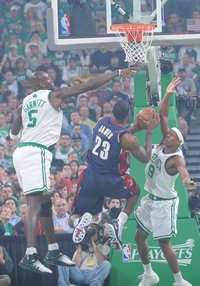 LeBron James is shooting an abhorrent 19% from the floor in the first two games against the Celtics. Of the 42 field goals that he has hoisted up, the League’s leading scorer has missed 34 of them. He has also coughed up the pill to the tune of 17 turnovers.

About the only thing he’s done effectively in the series so far, is chew his nails.

Little wonder the Cavs have dug themselves into what seems like an insurmountable hole.

This, obviously, isn’t typical of LBJ, but it’s also not the first time that a team has put the clamps on him in a postseason round.

Remember what took place against the Spurs in the NBA Finals?

Are these Celtics flashing the defensive ferocity and fundamental assault of those Spurs?

The C’s trapping, hounding, relentless defense might not only end up sending LeBron and the Cavs home early for the summer, but it will do nothing to quell the growing frustration toward Mike Brown (and his almost non-existent playbook.)