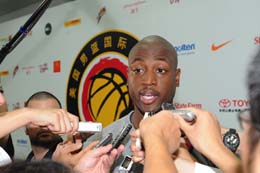 I know this is like asking, “You know what’s so savory about drinking urine?” but, seriously: you know what was the wittiest moment of Rush Hour 3? It was that cab scene. A lot of the dialogue amounted to very low-brow attempts at social humor centered around international American-backlash, but we were also treated to this exchange between Chris and the bigoted Slavic cabby…

Cabby: “You can’t even beat the Europeans in basketball, anymore. The Dream Team is dead!”
Chris: “Huh? I didn’t hear you, Man. Talk about the NBA again. I dare you! I double-dare you!”

In the early-90s, American basketball was one of a myriad examples of American hegemony. But since then, as with so many other things, the World has, at least seemingly, caught-up. Great, we all knew this. The telling, somewhat subtle and wildly hilarious quip – to me, at least – was nestled into Tucker’s response. He leaned in, got right in the cabby’s face, hit him with one of those OG-whispers, daring him to talk about “the NBA” again. The specificity of “the NBA” was too appropriate, since, in many ways, his reaction more of a visceral display of racial pride than a patriotic-reaction.

I’ve said this before, but a large sector of the black community (based on my unscientific research known as, “being black”) looks at the NBA as “their league.” The issues and incidents swirling around Barack Obama’s campaign have thrust certain topics into national discussion, one of them being the complex relationship between black folks and the idea/emotion of American patriotism (see Michelle Obama’s comment about national pride, the sideshow that was Reverend Jeremiah Wright and the predominantly black audience’s reaction to his “crazy-like-a-fox” clowning, during his National Press Club press conference). There is only a complex-simplicity, though, about black America’s love affair with the NBA. In fact, THAT should have been a segment on the CNN series.

The Rush Hour 3 exchange wouldn’t have made its way into a Larry The Cable Guy movie and if it somehow slid into a Jerry Seinfeld feature film, Jerry probably would’ve responded with something like, “I know, those guys have disappointed us, too!” But the ownership and

protectiveness that was the impetus for Tucker’s reaction was very real. It’s how me, my Pops, my uncles, my barbers and my crew would have felt in that cab, too.

So this Redeem Team is carrying two flags into Beijing. One for America and one for urban hoops/black America.

Major League Baseball has about two black players, I believe. Ryan Howard and…I think some dude playing with the KC Royals. The majority of NFL players are black, but the league’s owners and coaches remain entrenched in the Good ‘Ol Boy network and the league is still a bastion for the White Man As Leader paradigm found in the quarterback ranks. In the NBA, the leaders and prodigies, stars and role players, good guys and boneheads are predominantly black; so too are many of the coaches, much of management and a growing pool of majority and minority owners. The NBA, as Commissioner Stern has always touted, is in fact, a sort of symbol for afro-achievement. But the black community didn’t bear-hugged this league simply because it has a figurative black face. Gradually, as the NBA became increasingly black over the past 40 years, Dr. Naismith’s peach basket game looked more and more like the version of the game evolving on the blacktops of urban centers. Now, not only are the players black; one could argue that the game is, in aesthetic ways, black. The community loves it. If you walked into a barbershop or went to a cookout, sat down at a picnic table and heard, “Man, them bruthas be gettin’ down!” there are great odds that the NBA is the topic of conversation.

So when Team USA squads, full of black NBA players, began relinquishing international bragging rights over the past six years — mostly due to poor shooting, zone-trouble, bickering and senses of entitlement — it frustrated the general American public. But it “stung” a lot of black people. It didn’t help that the typically NBA-hating public spit out diatribes like skunky beer. By reading into national reaction, it would only take a mildly sensitive Afro-American to interpret the exasperation and disdain as this: “These non-fundamentals black players can’t shoot, can’t pass, can’t figure out this international game that seems to be more chess than checker. They are also selfish and childish.” Or, for the hyper-sensitive and conspiratorially-inclined: “Like animals, these black players are athletic, but dumb. They’re also social misfits and stunts.”

Of course, these were the veiled thoughts of only the most hideous folks. Yet, traces of this type of thinking is ingrained in the American psyche, specifically for those of “The Greatest Generation”

and “Baby Boomers.” So if the community sees “their guys” getting pelted from all corners, what happens? Exactly — they become even more invested in the NBA. That’s why there is a keen interest (propelled by a collectively zealous fandom) that black NBA fans are taking in this Redeem Team. As an African American man, but ultimately an individual, I never wanted to be represented by Paul Pierce or Tim Duncan or Allen Iverson or LeBron James. I do however, want those players to “represent.” Dig?

This thing is about bragging rights. Team USA, whether they know it or like it (although, I’m sure they are mostly all aware), is on a quest to bring gold back to America, yes, but also to the NBA and the hood (figurative hood, because I haven’t lived in the real hood for 15 years). For the first time ever, Team USA is all-black. There are no Brad Millers on this squad. The resulting statement from a gold medal (or failure, for that matter) would be the most poignant statement since the inaugural Global Tour business of the Dream Team.

If they kop those golds, I bet Detective James Carter would fly back to Paris just for a “WHAT NOW?!” moment with the Slavic cabby.

Vincent Thomas is a columnist and writer for SLAM. He can be reached at vincethomas79@gmail.com.