This year the Pistons care 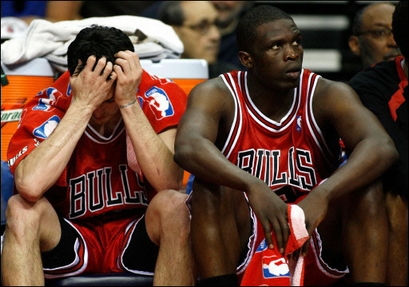 Mutoni and Russ wrote about last night’s games already, so there’s not much that needs to be said. Detroit is supposed to be a good team that gets disinterested and bored and lets teams hang around. Obviously that’s not the case right now. Golden State-Utah was a series that nobody saw coming, and it’s even stranger having two teams that haven’t been to the playoffs in years already in the second round with one of them guaranteed a shot to go to the Finals. After one game, it is a lot of fun. Game two is Wednesday night at 9 EST, meaning Stephen Jackson has 36 hours to stay out of trouble in Utah. Best of luck, sir.

Heroes was on, but I won’t bore you with the details of my personal TV viewing habits that aren’t work related. It was a good but not amazing episode. I had to actually consult The Bible after it was over to try and understand some of the imagery and why certain characters have certain names. Very excited for the season finale. And yes, I am aware that the new character they introduced was the biggest X-Men rip-off yet and that they might as well call her Cerebro.

Oh, I guess I did just bore you with the details of my personal TV viewing habits. Sorry. Uh… nothing further to add. I only wrote this cause I’m used to waking up and writing something about what happened in the NBA last night. Old habits. See you later today.