Thou shalt not question the NBA rule book 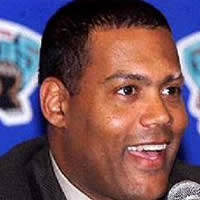 The ruling by Lord Stern and his minions came down from the mountain. Not happy. The Suns took the next step to become champions, completing one of the most improbable comebacks on the road in a playoff game we’ve seen in a long time. They outplayed, outclassed, and survived the dirty tactics of the Spurs. But Big Shot Rob just has that knack of swinging a playoff series in his team’s favor. If you are an NBA rulebook fundamentalist, then today your league delivered for you. The NBA showed absolutely no flexibility. All they care about is the perception that the game is “clean.” No fighting, but hey Bruce Bowen is still allowed to do what he does. It’s kind of funny how a few days ago he was kicking Amare in the Achilles to try and take him out of the series. Amare did it to himself by standing up and showing concern for his teammate. Stupid rules are meant to be broken. I am not a fundamentalist hard liner. Why is it too much to ask people in a position of power to exercise judgment? This is sports entertainment, not the military, despite what Popovich thinks.

Oh cool, so they’re admitting it’s not fair. Okay then. And by correctness, they are saying that they believe their holy rule book is “correct.” More from Stu…

“We don’t want to be in a position where we’re determining the outcome of a series.”

Oh yeah, well that’s exactly the position you are in. It’s amazing how San Antonio keeps getting by. Tim Duncan becomes the latest NBA superstar to be unfairly ejected by a ref’s biased vendetta, and it’s the ref who gets suspended for the playoffs. Bruce Bowen spends his nights kicking and knee-ing, and trying to hurt people by sliding under them when they shoot. He’s allowed to conduct his business as usual. Robert Horry throws his shoulder into the other team’s MVP who is half his size, and the Spurs still come out on the winning side of the exchange. And by the way, how can a Phoenix player not go after Horry after he did that? The Suns aren’t exactly choir boys, but even when they are the tougher team mentally at the end of a playoff game, they come off as the soft one. I for one, am glad Raja Bell stepped to him. As a fan of the New York Mets, looking back the 2000 World Series was over when the Mets tried to take the high road against a dirty player.

If you watch the NBA, you know what the solution is. Some real touchy foul calls on Tim Duncan. Do eight wrongs make a right? Maybe they do.

I was so disgusted by the ruling that I refused to turn on my TV last night. I spent the evening reading a novel. Take that NBA! Bulls-Pistons. Whatever. Russ wrote about it. Blowout. Chicago’s still alive.

Jazz-Warriors. The Golden State season ended and Mutoni wrote about it. I’m thankful they handled those games because I have absolutely zero to say. Congrats to the Jazz. If the Spurs don’t gag on the gift they were given, I’ll be cheering for you in the Conference Finals Utah.

If the Spurs blow it tonight, it’s their own fault. And that would be amazing. Let’s go SUNS!!! I hope Steve Nash goes off for 50 points. The Suns were the most electrifying and exciting team all season long, but they were eclipsed in buzz by the Warriors in the playoffs. It was easy to take Phoenix for granted and get used to seeing them run up 130 points on their hapless victims. Now that they have been dealt this hand, I hope that they can respond like champions. It almost feels like they are being tested, and it is their destiny to do so.