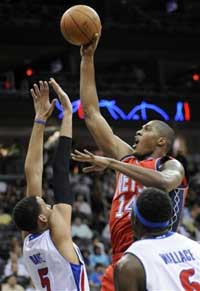 Now we’re getting into the swing of things, and the season is starting to heat up, and fast. There are 12 games on the docket for tonight, including intriguing match-ups like Memphis at Dallas, the Clippers at the Warriors, Lakers at Suns, and the Nuggets at the Hornets. But today’s Three Points come from a few of the other games on the schedule…

1. Can John Wall top Blake Griffin’s stunning performance last night? No. Blake Griffin’s 20-point and 9-offensive rebound night really was something else. After seeing the way that he skied for the ball on Wednesday, Wall had a lot of ground to catch up on in the ROY race before his season even started. But this award is about the whole season, not one game, and John Wall showed flashes of excellence even though he appeared to be playing with teammates who didn’t understand what a good shot is (no, JaVale McGee skying across the lane like Kareem Abdul-Jabbar with 6 on the shot clock is not acceptable, nor is Andray Blatche launching 20-footers after one pass). Wall finished the game with 16 points and 9 assists to go along with 3 steals and 3 turnovers, equal to the amount I challenged him to stay under in yesterday’s blog. His shot selection was good, but, as Charles Barkley and Kenny Smith stated at half time, if Wall is given room to pull-up on his man (which he was and will be because of his speed) then he has to get as close to the basket as he can and elevate over the top of the defender, instead of sitting back and shooting a set-shot from 18-20 feet. Wall is much too athletic and talented to not have a real jumper (he didn’t appear to have one last night) so that is something that he should be working on relentlessly.

2. What new offensive weapons, if any, will we see from Dwight Howard? To be fair, Dwight Howard didn’t really need to showcase anything new against a putrid Washington Wizards team defense that couldn’t keep the Magic out of the paint at all. Dwight was his usual self, dunking and powering through the chests of Javale McGee and Andray Blatche whenever he pleased to the tune of 23 points and 10 boards. At the line, Howard shot 9-19 while looking as shaky as ever. We will have to keep tracking Dwight against higher quality opponents to see if he has improved his offensive repertoire, but if his FT% doesn’t improve how can the Magic go to him late in games consistently?

3. How will Steve Nash adjust from his 9-turnover first game outing? Steve Nash isn’t going to adjust. He is going to keep lobbing passes toward Hakim Warrick around the rim and looking ahead to Jason Richardson on the wings. Nash had 18 points, 5 assists, 2 steals and 5 turnovers. A big factor in how Phoenix’s season plays out is the consistency of Hakim Warrick, who had 10 points and 2 boards in the first game of the season and rebounded yesterday for an 18-point, 11-board night that included a poster over a few Jazz players. In short, it wasn’t necessarily about Nash adjusting or rebounding — I admit when I use the wrong wording — but rather learning about his new teammates strengths and weaknesses while they learn about where he expects them to be on the floor.

1. Can the New York Knicks keep up with the Celtics? After a summer of change in New York fans are embracing their new-look Knicks team. Nothing would help the Knicks mojo more than putting up a fight against competitive teams early in the season. New York grinded out a win on the road to open the season against Toronto but tonight they face a far superior opponent in the Boston Celtics. The Celtics have already beaten the anointed Eastern Conference favorite Miami Heat on their home floor before losing on the road to a sub-par Cleveland team, proving that they are more than capable of being beat. The Celtics have as stingy a defense as there is, so the Knicks need to use Coach D’Antoni’s break neck up-and-down pace to wear the Celtics down by constantly penetrating and dishing to open shooters and hitting Amar’e Stoudemire in the middle regularly. Raymond Felton needs to do his best to keep Rajon Rondo out of the paint, which is no easy task, and the Knicks need to crash the defensive boar

ds hard because the Celtics have a ton of big bodies underneath. This game is a huge early season affair for the Knickerbockers and their fans.

2. Will DeMarcus Cousins or Derrick Favors walk away with bragging rights after the Kings face the Nets tonight? Ever since Derrick Favors got chosen with the second pick in the Draft this year, Cousins has voiced his alternate view on what the Nets should have done. Meanwhile, Derrick Favors seems to be shying away from highlighting their match-up. From my point of view, I understand both player’s perspectives and attitudes toward the match-up. Cousins is more of a chip-on-my-shoulder, remember everything, prove the haters wrong type of player while Derrick Favors is just trying to go out and do his job against no matter who he is playing against. These two rookies are so immensely talented and both have portions of their games that they need to improve. Cousins is an awesome passer, shoots the ball well consistently in the mid-range, and has a developing post game near the rim. He needs to work on running the floor harder and learning how to play defense without fouling, both of which should come with experience. Favors, while not as skilled as Cousins on the offensive end, is more of a hustle player at this point with the ability to pass out of the high post, make quick moves around the rim, and occasionally knock down a 15-footer. Tonight is going to be the first of many interesting match-ups between two young posts with contrasting personalities, attitudes, and games.

3. How will the Heat/Magic game play out? On the second night of a back-to-back for the Magic, they definitely have their work cut out for them on the road in the Miami Heat’s home opener in South Beach. The Magic starters won’t be tired, however, because they got enough rest on the bench last night after running up the score against the Wizards. There are a few main points that we will concentrate on within this match-up:

a) How will Miami defend Dwight Howard in the post? I think Miami will use their quickness and speed to double Dwight in the post whenever it is plausible to do so, while communicating and rotating around the perimeter in order to close out on Orlando’s shooters.

b) Will Miami be able to keep up with Orlando on the boards? The battle of the boards will be a huge factor in this game. The Heat had a tough time keeping Boston off the glass at times and is facing the most dominant rebounder in the League. Orlando also has other big bodies off the bench who might pose a problem to Miami.

c) How will LeBron adjust from his early season turnover bug? With each game LBJ is going to have a better feel for where his teammates are going to be. After two lackluster performances running the show for Miami, I expect him to begin to turn it around today.

d) Who will win the three-point battle? Miami and Orlando both aren’t shy about shooting the ball from the outside. Whoever gets hot and stays hot will gain the advantages of increased spacing and driving lanes.

Have any suggestions? Comment below or email me at JSBauman13@gmail.com.