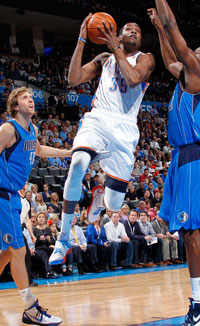 To say that a first-round series involving the defending Champs could possibly be a mismatch is certainly no stretch. Many title-holders head into the following year’s postseason are primed for another long spring run in hopes of another Championship.

This year, however, we might have the exact opposite.

The Dallas Mavericks head into Saturday’s Game 1 against the Oklahoma City Thunder in a much different spot than when these two teams met in last year’s Western Conference Finals. Limping into the postseason as a 7-seed and with a far different cast of characters on the roster, the Mavs are not the same team.

Just watching the League this season seemed like every Dallas home game involved someone who was getting a ring “after the fact” from the organization—all while wearing another team’s uniform. Yes, the familiar faces of Dirk Nowitzki, Jason Kidd and Brendan Haywood are still around, but gone are Caron Butler, JJ Barea, Corey Brewer and most importantly, Tyson Chandler. This is not the same team.

Meanwhile, the Thunder have changed too. They’ve grown a year older, gotten more experience and even added a guy who has a handful of rings in Derek Fisher. Kevin Durant and Russell Westbrook are the cover faces of the burgeoning Oklahoma City franchise, and for good reason. While many players get named to the All-Star Game, All-NBA honors are far tougher to garner. These two can be penciled-in to either the All-NBA First- or Second-Team for the next decade.

Throw-in a long cast of capable supporters, and you have a team that is sure to sit atop not only the Northwest Division, but quite possibly the entire Western Conference for that same amount of time. Remember, this team’s core of Westbrook, Durant, James Harden and Serge Ibaka are all 23 years of age of younger.

But there is one more piece to this puzzle in Oklahoma City that gives such promise. That would be the brilliant mind pulling the strings from the front office. Simply put, general manager Sam Presti is the best in the business. He has already put the future in place by signing his key guys to impressive, but not back-breaking deals. He has built not only a young core that plays an exciting brand of ball, but he has surrounded them with a group of veteran role players who “get it.”

The question of whether the young ones, and not the current title-holders, are truly ready to break through and represent the Western Conference has been an underlying, unspoken discussion for the past two seasons. This weekend, the Thunder will begin to answer that query.

The old and the new guard of floor generals match-up again. Kidd was born a point guard—always was pass-first—while Russ is the new breed of athletic, scoring 2-guards who have developed the skills necessary to run a team after being drafted. Kidd can still do work, knock-down key shots and set-up his guys in spots to be successful. Westbrook though, is looking to explode this postseason, and his mix and speed, strength and athleticism will be too much for the combo of Kidd and Rodrigue Beaubois to handle.

I am choosing these groupings, as the actual matchup we will see for the majority of games will involve bench impresarios James Harden and Jason Terry (will get to those below). There is little between these groups, but the defense put forth by Thabo and the spot-scoring by Cook is similar to what the Mavs will get from their duo.

The Matrix is a perfect fit for this Dallas team, as he can still score the ball from the perimeter or at the rim. While his defense is not what it used to be, he can still frustrate opposing scorers. But his match in this series just happens to be the best scorer on the planet. KD is primed and ready for this postseason and some revenge on the Mavs should only sweeten his “motivation pot.” Durant is ready. Mavs can’t stop him.

The growth and maturation of Ibaka has continued and while he didn’t make major leaps this season, he is still the perfect compliment to the dynamic duo of Westbrook and Durant. Dirk is still Dirk and will get his points and lead his team through bouts of offensive inconsistency. The question was always whether Dirk had enough “around him,” to get to the next level. Last year, that was in place and we know the results. This year’s team is just different.

The Kendrick experiment in last year’s post-season run was a complete failure for OKC. This year has not been “earth shattering” either, but he did perform at or near his career averages and his place and role on this team is solidified. Not much different on the other side of the ledger. Haywood does similar work at a similar rate, so I don’t see much difference between the two. I would have played the “Perk has a ring argument,” but can’t make that after last year.

Each team has some great bench guys to rely on, as Harden and Terry are arguably the League’s two most explosive and important players who don’t hear their names in the starting line-ups. Brooks has grown as a coach and seems to be more than comfortable leaning on guys and sitting others when necessary. Harden’s health appears to be in order giving OKC a creator and a scorer from several positions. Carlisle is solid and a good in-game coach, but Harden is the difference maker.

Prediction: Even when I try to give Dallas reasons to steal just one game, I find holes in that very same argument. I see this series going only one way.