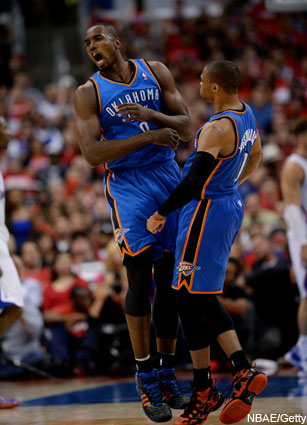 Over the past few months, the Pacers have played a brand of basketball so ugly that not even a mother could love it. So what did they do when they needed a win going on the road?

They dragged the Wizards right into the muck with them.

“That’s what we do,” said Paul George. “Whether you like it or not, you’re a fan of watching our games or not, defense is what we hang our hats on.”

Indiana slowed the game to a glacial pace and played their best defense of the Playoffs, bludgeoning Washington into endless bricked mid-range jumpers in a low-scoring, ugly win. In the process, they held the Wizards to a Playoff franchise-worst 63 points on 32.9 percent shooting.

George battled his way to 23 points for the Pacers, getting to the line frequently and hitting 9-10 from the stripe amidst a 6-15 shooting night to lead the team. While Indiana wasn’t all that more proficient than the Wizards from the field, hitting just 41.9 of their own shots, they were able to creep away after halftime when the Wizards couldn’t get out of their own way, as missed free throws (11-21) begat turnovers (17) begat bricks upon bricks for Washington.

“It was just one of those nights from an offensive standpoint,” said Wizards coach Randy Wittman.

Before the game, Wittman spoke about the need to push the tempo, saying that the team was at its best when getting the ball up the court quickly. John Wall (15 points, 6-13 shooting, 6 assists, 7 turnovers) made every effort to do that, but was met with by a platoon of Pacers defenders nearly every time. Indecision and a lack of support on the break led to many of his 7 TOs, as the Wizards were able to get just 8 points in transition.

“I didn’t think we had five guys running with [Wall] the way we are capable of doing from an offensive standpoint,” Wittman said.

Frank Vogel was understandably pleased with his team’s airtight defense. After cleaning up some shoddy rebounding early, when Trevor Ariza (12 points, 15 rebounds) grabbed 5 offensive boards—“We made sure we put a body on him”—the Pacers played as well on the defensive end as they have all season.

“I don’t think we’ve ever been that far from who we were tonight. Our guys just recognized that we had to get this win,” Vogel said.

After a sluggish first half by both teams, where Indiana and Washington shot 38.9 and 30.4 percent, respectively, the Pacers got rolling in the third quarter behind a rejuvenated Roy Hibbert. For the second straight game, the big man was effective offensively, going for 14 points on 6-9 shooting, while making himself a presence on the defensive end with 5 rebounds and 3 blocks. He scored 6 of his points in the third, including a looping up-and-under layup that proved that it just wasn’t going to be Washington’s night.

“I just try to be aggressive and pick my parts and let the offense come to me,” Hibbert said after the game. “Offense comes and goes, but you’ve got to be consistent on the defensive end.”

That vaunted defense locked the Wizards down with just 12 points in the third, snuffing out any attempt at closing the gap that Washington made.

“We just strapped down and wanted to limit them to one shot,” Hibbert said. The Pacers were successful in that, holding Washington to 10 offensive rebounds after 7 in the first quarter.

Indiana had success forcing the Wizards into tough shots they don’t normally take, including a slew of one-on-one pull-up jumpers in the half-court. Bradley Beal, who broke out as a star in the first round and took it to the Pacers in Game 1 of this series, was a victim of that. The second-year guard scored 16 points, including the first 9 for the Wizards in the fourth quarter, but 6-19 from the field and had to scramble to get any kind of look at the basket.

“They contested a lot of shots, they didn’t make anything easy,” Beal said. “We’ve got to get back to our style, our game. I think we got too involved in what they do and let them affect us too much. We’ve got to get them to play our style of basketball. We’ve just got to make them play faster and speed up.”

After this historically bad effort, there’s not much for the Wizards to dwell on. Andre Miller, one of the veteran voices in the locker room, preached the importance of a short memory.

“We just move on to the next game, that’s all you’ve got to do.”

Washington will get a chance to even the series at home on Sunday.—Brett Weisband

After hanging a triple-double on the Clippers in Game 2, Westbrook bounced off a high screen on the left wing and drilled a pull-up triple at the top of the key to put OKC up four. After Chris Paul missed a three-pointer on the other end, CP3 switched onto Kevin Durant on the right wing following a screen with Russ. The MVP backed down State Farm’s spokesman with two dribbles, spun over his left shoulder and swished and impossible fade-away to deliver the dagger.

“We competed all game,” Durant told ESPN’s JA Adande after the game. “They started off really hot, we just weathered the storm. Every run they made, we just came back fighting. We made the last run tonight.”

Westbrook’s huge three started a 7-0 run that proved too much for the Clips to overcome, especially after L.A. allowed the Thunder to take 13 seconds off the clock in the game’s final minute rather than fouling down six with 40 ticks left.

That mistake was not Doc Rivers’ finest moment.

Prior to the game, Doc spoke about the Clippers coming out aggressive, especially playing through Blake Griffin in the post.

“We do want him to attack more,” Rivers said 90 minutes before tipoff. “I don’t think this is going to be one of those back down, post-up series for him with Perk and Ibaka. But I do think it’s a face up series with speed and attacking that way, and we just have to get him in better spots to do that.”

Griffin went to work on Serge Ibaka on the left block from the early going. Ibaka drew his second foul with just under 9 minutes left in the first quarter as the Clippers began the contest on a 7-0 spurt. As Durant said post-game, OKC responded, taking its first lead on a KD jumper with 2:44 left in the frame. Durant had 15 on 5-7 shooting in the opening stanza while Griffin dropped 14 on 8-9 shooting at the charity stripe.

The second quarter introduced a critical them in the affair: the major difference in these two team’s second units. The Thunder bring players off the bench who defend and rebound while the Clippers bench focuses on scoring.

In two key stretches of the game, the beginning of the second and beginning of the fourth, OKC feasted on L.A.’s small lineup that featured Glen Davis, Jared Dudley, Jamal Crawford, Darren Collison and Chris Paul. Dudley guarded Durant, which naturally went horribly wrong for the Boston College product. But on the other end Jamal Crawford delivered 20 points on the evening to keep pace.

The second half was truly a heavyweight fight with each team throwing its best punch. The Clips ran their deadly series of pick-and-rolls to get CP3 into space and fed Griffin on the block while the Thunder played through either Westbrook and Durant who either torched the defense or found open looks for their teammates. Serge Ibaka came up huge down the stretch for OKC, playing like a true No. 3 option during his 20-point performance on 9-10 shooting.

Watching Blake battle with Ibaka and Steven Adams in the post was what basketball, and the NBA in particular, is all about: immensely gifted athletes clawing for every inch of precious real estate near the rim. Blake was superb even after brawling with those dudes down low, finishing with 34. Meanwhile, Durant and Westbrook were simply filthy penetrating to the hole and Reggie Jackson did his fair share of knifing through the paint, too.

But down the stretch, it all came down to OKC going small while the Clippers ran a crunch-time lineup of CP3, Crawford, Matt Barnes, Griffin and DeAndre Jordan. Scott Brooks countered with Westbrook, Jackson, Caron Butler, Kevin Durant and Serge Ibaka and the Thunder escaped unscathed with KD sticking DJ on defense for the final four minutes. Meanwhile, their speed was too much for L.A. to handle on the other end and allowed OKC to surge toward the finish line.

For as much criticism as Brooks gets during the playoffs each year, that lineup proved lethal and ultimately won this tough game on the road.

And of course, of the 203 best-of-seven series that have been tied 1-1 in NBA history, the Game 3 winner goes on to win the series 76 percent of the time. Thankfully for the Thunder, KD delivered a 36-8-6 performance and Russ chipped in 23, 13 dimes and boards to swing history into their favor.—Jake Fischer