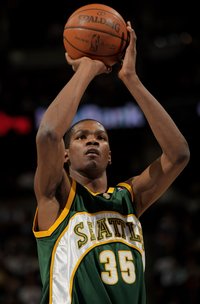 Looking for something to do in Oklahoma City on a Friday night? And really, who isn’t, right? Well, you can go ahead and cross catching a Thunder game right off your list.

All of the season tickets for the League’s newest franchise were snapped up in under a week.

It was scheduled to be an eight-day process but ended on the fifth day when the team ran out of seats Friday night. In five days, the Thunder sold around 13,000 season tickets, around 14,000 if you include suites.

The Celtics, Lakers, Suns and Thunder are the only four NBA franchises with a season ticket waiting list.

I wouldn’t worry too much about it, Oklahomans. Plenty of tickets will be available come February or so, when the Thunder are staring down something like a ten-game losing streak.