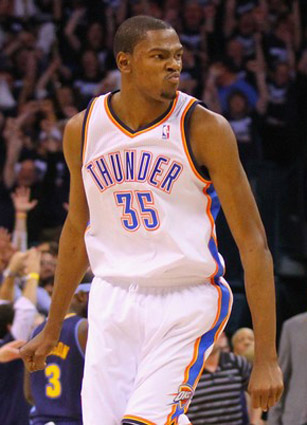 This is just a fascinating series. In fact, it’s the series that will force fans and cult-followers alike to choose an alliance. The Oklahoma City Thunder and the Memphis Grizzlies, teams hardly built on any sort tradition, entwined in the battle to both emerge from the Western semis and to win our collective affection.

The Thunder, more entrenched in our likability index, beat 50-win Denver will relative ease; their challengers are the Grizzlies, the recent gratifiers who played with the ferocity of the underdog and in the process did something that usually warms the heart—beat the Spurs.

Few expected us to be here, but we are. Some points of note on this Thunder-Grizzlies second-round matchup:

—Examining the season series usually reveals little—regular season and playoff games just differ too much in the variables—and in this instance, it’s rather pointless. Earlier matchups contained things like the presence of Rudy Gay or Jeff Green drawing the ghastly defensive assignment of Zach Randolph, and were done and dusted by February’s first week. The game that was played post-trade deadline—a 107-101 Grizzlies home triumph in early March—saw Memphis without Gay and OKC without Kendrick Perkins. Just what, exactly, can we decipher out a 3-1 Grizzlies advantage? Not much. And that isn’t necessarily a bad thing, adding further intrigue to a series that has no shortage of it.

—The Grizzlies can throw a surprising amount of defense at Kevin Durant. The consensus is that Tony Allen, both battle-tested and yet crazy/daring enough for the task, will get first shot at KD, this despite giving up somewhere between a five and seven inches, depending on your gullibility at Durant’s listed height. Shane Battier, also battle-tested, is an excellent position defender and at least has something to hang his hat on—it wasn’t until their 10th meeting that KD cracked 30 against him. Sam Young, with his strength, will also see time on Durant. Keep in mind, Durant comes into this series feeling rather good, with the two-time reigning scoring champ going for over 40 twice and averaging 32 on 47-43-84 against Denver, not to mention the uncorking of that Game 5 epic.

—Zach Randolph was the best player in the Spurs series. Consider that a fact. He sent an early message in the opener, hauled them over the line in Game 3, and just owned the stretch run in the clincher. He was at 21 and 9 on 50 percent shooting, but those numbers did little justice to his contribution: he was both a leader and unrelenting post option. Had the Thunder not traded Green, they would have been underwhelming in their defensive offering, but they now start Serge Ibaka (11 rebounds, 4 blocks per game in the Denver series), both athletic and increasingly smart as a defender, and Nick Collison, resident banger and irritant, as a back-up. Randolph will have success, but it will be earned success; both his regular season against OKC (26 points per game on a staggering 58% shooting) and his Spurs series performance makes him feared.

—This series is a celebration of depth. Consider Oklahoma City for a moment: In their series with Denver, they had a 30-point scorer, a 20-point scorer, two other double-figure scorers and then another four at 5 points or better. If that description came without a tag you’d guess it belonged to the Lakers, never a bad team to be mistaken for. As for Memphis, their depth was outlined by Jeff Van Gundy in Game 6, who said the Grizzlies’ ability to beat San Antonio wasn’t as shocking as first thought; they did, after all, “have more good players.” They run nine-deep (even without Gay), have no shortage of size, and are stocked with capable perimeter defenders. Whoever can produce the most contributors will be better poised to advance.

—This series could be won in the paint. Simple, obvious, and true. Memphis flat beat San Antonio in the painted area, superior both athletically and energetically, unleashing this three-headed monster of Randolph, Marc Gasol, who went 14 and 12, numbers that exceeded that of Tim Duncan, and Darrell Arthur, a dunking fool who doubled as a crowd igniter. Oklahoma City can counter with Perkins’ deadpan expression, Playoff know-how, and rock-like defense, Ibaka’s uncompromised energy and somewhat innocence for the big occasion, Collison’s savvy, and Nazr Mohammed’s size. The Thunder smashed Denver on the boards in all five games and held the league’s top-scoring team under their average in every contest, in large part by containing easy looks.

—Prediction: Oklahoma City in six. And that was a tough call, especially with that meaning the Thunder will clinch in Memphis. OKC’s ability to defend their home floor, combat Memphis’ inside attack, and the Durant factor are too much to ignore. Expect an entertaining series, and don’t expect the Griz to go quietly.