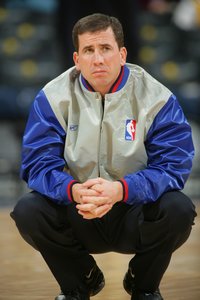 As if the whole Tim Donaghy fiasco – in and of itself – wasn’t a big enough concern for the League and its stakeholders, but now Donaghy’s lawyer says that it’s not just Donaghy who’s dirty.

According to a letter written by John Lauro, Donaghy’s lawyer, relationships between refs, coaches and even some players may have “prevented games from being played on a level playing field.”

According to documents filed by the lawyer, John Lauro, Donaghy provided law enforcement officials with information about N.B.A. matters outside of the government’s original investigation. That included information about the gambling activities of other referees and an instance in which confidential information was suspected of being passed from a referee to a coach.

In a footnote to the document, Lauro suggested that the N.B.A. might have “pressured” the United States attorney’s office “into shutting down this prosecution to avoid the disclosure of information unrelated to Tim’s conduct.”

Lauro’s main goal in writing the letter, of course, is to get a reduced sentence for his client – he’s seeking probation for the ex referee. His claims can (and will probably) be easily dismissed as desperate claims by a desperate man, but the simple fact that they have been made in the first place, is a concern.