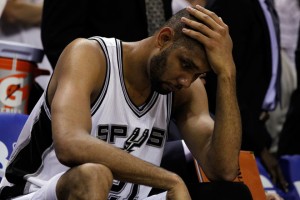 Death is knocking at the San Antonio Spurs’ door, and the knock is only getting louder.

And even though the young, hungry, and wildly talented OKC Thunder delivered an absolutely devastating blow last night in San Antonio, the Spurs’ leaders are putting on a brave face.

To a man, they all say that they’re ready to get it on in Game 6, in an attempt to stave off Playoff elimination.

Post-shower sweat was still trickling off Tim Duncan’s brow after the Spurs absorbed their third straight loss to the Thunder in the Western Conference finals, a debilitating 108-103 loss at the AT&T Center, but Duncan had a request that surprised everyone: Start Game 6 immediately, please. “I’m ready to play right now,” the Spurs captain said after scoring 18 points and grabbing 12 rebounds in just over 33 minutes of court time. “It’s a heartbreaking way to end that game. I’m ready to get ready to get out there and lace them up again and go.”

Duncan said he was ready to play as much as necessary in Game 6. Stephen Jackson, one of three Spurs who were with him on the 2003 championship team, vowed to play every minute of Wednesday’s Game 6 if need be. “I can play the whole game,” he said. “Before I came here, I was in the top five in minutes the last couple years. I’m used to playing a lot of minutes, and if I have to, I can.” […] Jackson expressed confidence in the Spurs’ ability to bring the series back to San Antonio for a deciding Game 7. “You know me,” he said. “I’m not submitting to nothing. We’re going to go win this game. We have to. If they can do it, we can do it. I give them their props. They came in and did what they’re supposed to do. They’re a great young team, but we’ve got to go do the same thing. I’m not counting us out.”

Duncan was even more certain of the Spurs’ ability to bounce back. “I absolutely believe we can win,” he said. “I believe we’ve got the right formula, the right attitude and mindset to be able to win on the road. We’ve been in this situation before. I think we’re all very sad and upset about the loss, but we’re excited to go out there, lace them up and go again.”

The San Antonio Spurs sound like desperate men, which is precisely what they are. Their remarkable season is on the verge of termination, and they will need to play a near-perfect Game 6 in order to push this series to the limit.

San Antonio is (obviously) not ready to count itself out; is anyone?