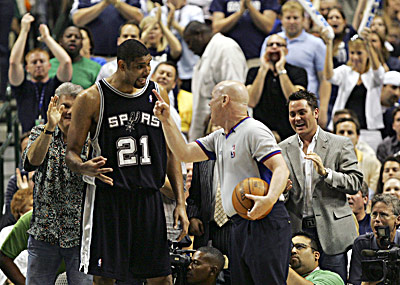 If you happened to miss yesterday afternoon’s Mavs-Spurs tilt, it would have been understandable. I sure didn’t watch. With hardly any playoff implications, and with everyone waiting for the regular season to mercifully end, it was hard to get excited for the showdown. Even if it featured two of the best teams in the Association. Judging from the highlights, it was a pretty good game, but the real story was the Duncan-Crawford beef.

Initially, it looked as though Joey Crawford ejected Tim Duncan for basically laughing. Sitting on the bench, Timmy was assessed with his first technical for criticizing an offensive foul call. A little over a minute later, with Duncan still on the bench, Josh Howard drove into the lane and lost control of the ball after grazing Fabricio Oberto. Crawford called a blocking foul on Oberto, and Duncan did the only thing he (or anyone else) could do at the moment: he laughed at the absurdity of the call. The emotional Crawford was not amused and threw Tim out of the game.

In the postgame press conference, Duncan claimed that Crawford – get this – challenged him to a fight:

Crawford’s side of the story:

“And then he went over to the bench and he was over there doing the same stuff behind our back,” Crawford said. “I hit him with one (technical) and he kept going over there, and I look over there and he’s still complaining. So I threw him out.”

“That’s his opinion. He said nothing when he was walking off the court and he called me a piece of (expletive). Is that nothing?”

Obviously, this is awesome and I love that some of Duncan’s gangster has finally surfaced after all of these years. If there’s any justice in the world, the League will assign the hot-headed (and possibly senile) Crawford to a Spurs playoff series. Someone should probably alert Don King.