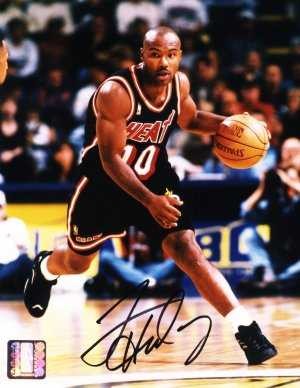 Tim Hardaway, speaking to columnist Dan Le Batard on his radio show Wednesday, showed why the NBA (despite what the commish would have you believe) is probably nowhere near ready to accept an openly gay player. And he managed to do it in exceptionally ignorant fashion:

No, go ahead, Tim. Tell us how you really feel:

“Something has to give,” he said. “And I think the majority of players would ask for him to be traded or they would want to be traded. Or buy him out of his contract and just let him go. Something has to give. If you have 12 other ballplayers in your locker room that are upset and can’t concentrate and always worried about him in the locker room or on the court it’s going to be hard for your teammates to win and accept him as a teammate.”

You don’t say. Well, Tim, what if this player was a superstar talent?

What’s that? You have something to add? By all means:

Tell you what, Tim Hardaway: I’m just going to head over to YouTube and watch you shatter some ankles, and pretend that none of this is real.

(UPDATE: Tim apologized after the radio show: “Yes, I regret it. I’m sorry. I shouldn’t have said I hate gay people or anything like that,” he said. “That was my mistake.”)

Whew! Glad that’s over with. Moving on…

Just for the sake of piling on, here’s a little bit more Hardaway for you:

-Props to Sports By Brooks for digging up a rather amusing link to an Outsports.com article from 2001 listing the “Ten Most Likely Gay Ballers in the NBA”: They ranked Tim at #7.

–Word is that Tim Hardaway is going to be in Vegas this weekend, which is just about the most amazing thing ever.

-Here’s a link to video of Tim enjoying some quality time with the fellas in the locker room. HMMMMMMMMMMM….

(Hey, Sam Smith: I put that together while fully clothed. Eff what ya heard, old man!)