Four families selected by the Indiana Boys and Girls Club walked into Bankers Life Fieldhouse expecting a tour of the famous home of the Pacers.

They got that and so much more.

Power forward Lavoy Allen helped orchestrate a heartwarming surprise, as the families were shown around the facility and then unexpectedly showered with a plethora of Christmas’ gifts at the tour’s conclusion. The gifts included toys, video games, a television, signed items and more.

The young kids were shocked and jubilant by what they saw. According to Allen, one of the older ones struggled to hold back tears of joy. It was a profoundly emotional moment—one that touched Lavoy, and always has. 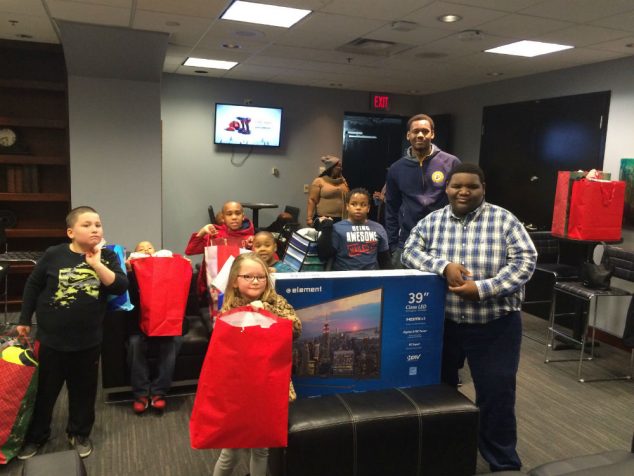 This is the third year in a row that the Pacers have partnered with the Boys and Girls Club to pull off this event. Allen has also been involved with many other charitable initiatives. In his eyes, that’s what it’s all about. Having an impact off the court. Returning the favor to fans who have supported him throughout his career.

“There is no NBA without fans and people coming to your games and watching on TV. So it’s only right that every NBA player, every team, every owner, we all just try to give back to our fans. To show our appreciation for all that they help us accomplish,” he said.

And what better time to do that than the holidays.

This specific Christmas-themed community event was something the Pacers conceived of on their own, demonstrating their unwavering commitment to helping those in need. For players like Allen, this isn’t a necessary part of the job that feels like a distraction or burden. In fact, it is the complete opposite. It is what makes the job so special. It is the best part of the job.

“The best thing about this job is not only are you able to help family and friends, but a lot of people that are in need. And that’s pretty much my favorite part of being able to play in the NBA…just being able to reach out and help many people.”

Allen’s perspective reflects the greater culture of the NBA. The League is tremendously philanthropic and filled with players who care deeply about serving their communities. Basketball is what brought them here, to the spotlight, to this influential place of power. And now these athletes are determined to use their power to do something even more admirable than nailing the game-winner or putting someone on a poster—make a difference in the lives of others, with gestures small and large.

“Sometimes…you don’t realize that just the smallest gesture that you make could mean a lot to people,” Lavoy reiterated. “That’s the one thing I try to do, no matter how small or big it is, I try to give back as much as I can. Like I said, it’s my favorite part.”

REPORT: T.J. McConnell Out ‘Multiple Months’ After Surgery on Hand

Pacers Forward T.J. Warren Out Until 2022