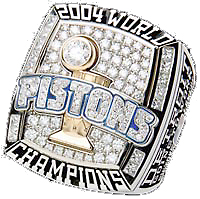 QUOTES OF THE DAY

“All ice. Icing everywhere. It would probably have a No. 1 in the middle just iced out and just crazy ice, that’s all I’ve got say. And real big, real big.” — Dwyane Wade, on his design for the Heat championship ring.

“I haven’t really had an opportunity to get too many calls. I think I already forgot my password to my voicemail, so I ain’t checked my voicemail yet.” — Dwyane Wade.

“Some people tried to act like there was something wrong with LeBron not signing the full max contract. I call that pessimism in search of an object. We have him for four more years, and we’re excited about that.” — Dan Gilbert, Cavs owner.

THE LINKS…
• Cavs owner and money machine Dan Gilbert says they’re excited to have LeBron under contract, no matter how long he’s signed for. Good interview with Gilbert, who comes across as the kind of owner a lot of fans — OK, at least Hawks fans — would like to have.

• Sixers coach Mo Cheeks believes that Allen Iverson will be back in Philly next season. We’ll have more on Iverson later today in The Links…

• …but Sixers young buck Louis Williams is tearing it up in the summer leagues. I heard him described by someone out there observing as “bouncy as hell” on the floor.

• Hearing that Michael Jordan has hired a friend to serve as the president of the BETcats doesn’t sound so promising, but Fred Whitfield has impressive credentials and he’s from Charlotte, so maybe this is actually a nice fit.

• Checking in with the Heat players as they recover from their championship hangover.

• The Blazers were so excited to ink Ghostface Przyzbilla to an extension that they printed up t-shirts and invited fans to a press conference and everything.

• Not only is JR Smith pumped to go somewhere he’ll get playing time, but he says Kenyon Martin is his mom’s favorite player.

• Mike Fisher is a funny guy in his blog here.

• The Jazz must have hired the Nets’ former doctor: They just sent their second guy home from the summer leagues due to high blood pressure. Either they need a nutritionist out there or everyone can’t handle Jerry Sloan.

• The Kings are close to agreeing to a new arena deal to keep them in Sacto.

• The New York Post says that the Knicks signing Jackie Butler would be “fiscal insanity,” although that would seem to suggest some previous degree of fiscal sanity had been involved with the team.