Who Shot Ya?: Tom Medvedich 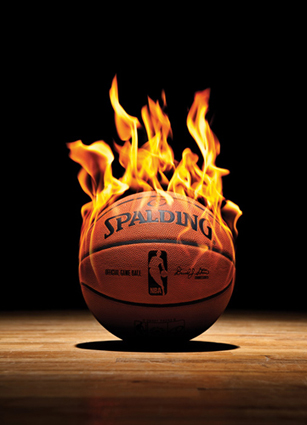 Proud as we are of the way SLAM reads, we know the biggest reason we’ve lasted 20 years is how the mag looks. To celebrate some of our most memorable photo shoots we spoke to the great photographers who made them happen.

SLAM has been bringing the stories of players to the forefront for two decades, but rarely do we get to hear from the people behind the lens who provide the iconic shots that will live on long after the player’s career is over. Between the phone calls, e-mails, scheduling, cancellations and moody subjects, the amount of work it takes to get the perfect shot is one of the toughest aspects of bringing you the best in basketball month after month, and year after year.

At 28 years old, Tom Medvedich has already worked with heavyweights in both sport and music. Thanks to a tireless work ethic and a visually stunning style, Medvedich is following in the footsteps of guys like Atiba Jefferson, Jonathan Mannion and Clay Patrick McBride as the go-to photographer for SLAM. Having already shot one of the dopest covers in SLAM history with Carmelo Anthony for Ish 162, the New Jersey native is already showing out and proving himself as next up in the photography world. As the editorial world continues to change every day, Medvedich’s digital prowess and style will continue to win him opportunities despite the changing landscape.

To view more of Tom’s work, check out www.tommedvedich.com.

On shooting Carmelo Anthony for SLAM 162…

He was actually super cool. I believe he was my first celebrity cover. He had a great attitude the whole time. We wanted to have the whole Empire State Building in the background and it turned out to be an amazing view from the Ace Hotel in Manhattan. It was a good vibe, the weather was real nice and everyone seemed to be on the same page.

I thought it was a strong statement trying to support New York. The Knicks did good this year, but before this year no one really showed them a lot of love. Carmelo has so many critics since he’s never won a ring and I think he was into it because he was standing up for the city and making a statement.

On his favorite shoot for SLAM…

That’s a tough one, I’ve loved them all for a lot of different reasons. But I gotta tell you, the shoot I did with Delonte West is hands down my favorite…it was such a crazy day. Tzvi (Twersky, SLAM Senior Editor) and I went down there and it was a circus, the whole process of going from place to place was crazy. He was such a cool dude and entertaining and hospitable. His mom got us food and all this stuff. It was a good time, not your average athlete or celebrity shoot, that’s for sure.

In general, he gave us more time than people usually do. We were with him for literally an entire day, and you’re going to get great pictures that way because you’re going to get something real. He was just so nice and was super comfortable in his home with his family around. It was different than a usual shoot when you have handlers there and people looking over your shoulder and wanting to see every frame. It felt way more relaxed and he was just a cool, super nice guy. It was a pleasure.

It’s been a bummer. Sometimes when you meet a celebrity, you’re not as much of a fan after as you were before [laughs]. I’m not a huge basketball person so I don’t know much but after meeting him, I rooted for him on a personal level and on a basketball level. Seeing everything go down the way it did and having his troubles is frustrating because you think, ‘C’mon man, you’re a good dude and good at what you do. You just gotta get your act together.’ You want him to win on every level. It gets frustrating but what can you do?

For the Blake Griffin shoot (SLAM 166), I flew to L.A. for that—it is what it is, you gotta do what you gotta do. You’re making a huge journey over there and you’re at the mercy of wherever you are. We had a studio and we had to follow a Jordan Brand commercial, so we were on someone else’s time. The director wanted one more hour with him, so we had to wait for a minute. He was a real cool dude but he had a lot of stuff going on, so it was tough. The positive side of not having a lot of time with a more established athlete is they know how to pose and how to stand and everything so you can get what you need faster as opposed to someone who doesn’t know what they’re doing.

[With the high schoolers] we usually go to the high school that they are at. [With Ricky Ledo] we did some shots in the gym, we went into the weight room, obviously it depends on their schedule but they’re in high school so they don’t have that much going on. Dwyane Wade was bouncing around three corners of the gym because he was doing a commercial, a SLAM shoot and another commercial. It’s good with a kid because you have way more freedom and can move around a lot more.

The difference between shooting athletes and rappers…

Basically I think the difference is the athletes trust that you’re going to make them look good while rappers are a little more worried about how they are going to look. That’s not limited to me, I think that’s with every photographer. [Rappers] want to be shown in a certain light and they want to wear what they want to wear and all that. It’s definitely a relaxed environment and it’s fun, but things move a little slower on a rap shoot.

Impact of SLAM on his career…

I think it’s an honor any time you get hired for any type of editorial work, someone is really trusting their reputation with you. People think it’s so easy…You just go in, click a button and that’s it. They don’t see how much work goes into it between all the e-mails, phone calls and production and trying to fix your location and dealing with all the back end stuff before it even happens is a job in itself. When you get the chance to shoot something like this, someone really puts their faith in you that you’re going to be a good representative for SLAM. It means a lot, I definitely don’t take that lightly. It’s been something I’ve been working my whole adult life toward and I appreciate every chance I get.

Working with SLAM has been a good look for me because I’ve gotten work through Reebok and other companies along the way, so for me it’s a blessing. I don’t feel like anyone owes me anything—I’m still a kid coming up in the game. I’m basically always going to appreciate the opportunities I’m given and what it means, I’m happy that I can be a part of history.

I’m just doing my job. I know kids love basketball but to be able to contribute to basketball on that level is really cool. I really think it’s an honor to be able to involved with something that touches so many people and that’s why I like doing these projects with SLAM. For me, it’s super cool and always exciting. I always wondered if shooting down the road, it’s just going to be another call. But every time I step on set and get ready to meet anyone, whether it’s a high school kid or someone who has a ring, it’s always exciting. I’m just happy to be there, honestly.

Related:
Who Shot Ya?: Jonathan Mannion
Who Shot Ya?: Atiba Jefferson
SLAM’s 20th anniversary issue is on sale now!
A bunch of NBA players speak about their SLAM cover experiences