Too much too soon. Too little too late 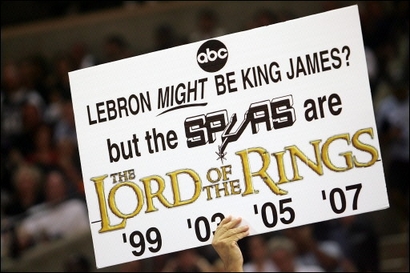 I thought that I would wake up and be unable to write about anything other than The Sopranos finale. As it turns out, I have no interest in going there. Don’t even worry about spoiler possibilities. Like millions of others (thousands?) I turned to Game Two of The Finals as soon as me and my friends had finished coming up with creative ways to decide how disappointed we were in the ending. The score of the game at that time was 49-27.

From what I have been told by the four horsemen of the apocalypse known as Grant Hill, Jon Barry, Mike Wilbon, and Dan Patrick, it was Mike Brown’s decision to sit LeBron with 2 fouls early on. Um… well that certainly is playing it by the book. The Cavs are outmanned, outclassed, out-everythinged, even with LeBron playing. Remove him from the equation… ugly. I don’t know if Mike Brown is aware of this, but when you are the underdog, sometimes you have to take “crazy” risks to make up for the difference. Would LeBron have picked up his third foul in the first quarter? If so, could that have possibly made things any worse for Cleveland? One thing the first half did was prove that the hype is real, the Cleveland Cavaliers truly are one of the worst teams ever to make it to the NBA Finals. If LeBron is out of the game, they should just walk the ball up, let the shot clock expire without taking a shot, and stall for time until he can come back in.

Meanwhile the Spurs continue to play flawlessly. Tony Parker has been hit or miss in the playoffs this year, and for the past two games, it’s been HIT HIT HIT!!! Sure, they had the puff piece of all puff pieces at halftime on his wedding to Eva, but right now Tony might be the favorite to win Finals MVP. This would be a good summer for him.

And then there is the Cavalier comeback in the fourth quarter. San Antonio started choking a little bit, and there was a brief moment where it felt like the greatest comeback ever was possible. Cleveland attacked, hit some shots, got to the line, came up with stops, all of the things that happen on a huge run. LeBron blatantly elbowing Manu in the face with no call on the play? That’s what Manu gets for crying wolf so many times. Justice! That was a direct shot to the face and the refs reaction must have been “Oh look. There’s Manu being Manu again.” But this one time he actually belonged on the floor and the offensive foul should have been called on the other player. Too bad. Flopper.

Of course he flopped on a three a few moments later and created the four-point play. The fingertips of Daniel Gibson are enough to send a grown man much bigger than himself flying through the air in dramatic agony. Cleveland’s rally fell short when they started going to the offensive set called, um, swing the ball around dangerously and hope for a deep contested three? Mike Brown is a good defensive coach – not in the first three quarters last night – but he usually is. On the offensive side, well, LeBron.

Cleveland fans have never seen their team in The Finals. They should be VERY fired up, even being down 0-2. LeBron should receive some calls. I dunno man, it’s hard to make a case for them. Sadly, the Spurs would have been ready to overlook them and give a game away if not for what happened in the fourth quarter. One of the most important facts to remember about the ’06-’07 season is that the Eastern Conference was inferior. For their champion to be swept without mercy, it puts a nice exclamation point on the conference gap. The Spurs can do this. Can Cleveland really overcome back-to-back 0-2 deficits? That is asking for a lot from them.

Two other big stories to mention are of course the JR Smith car accident and Gilbert Arenas’s decision to opt out. Thankfully JR is okay, even it was his own fault for ignoring a stop sign. Let’s just hope that his passenger Andre Bell, who is only 21 years old, is alright. Gilbert’s money decision? Yup, it is just a business even for the goofballs. A few months ago when I wrote my “Which NBA Player Are You” column for the magazine, I used Gilbert and Jim Carrey. Soon you will be able to add another category to that, something about them being wealthy beyond your wildest dreams so don’t be fooled by the funnyman act. If you are a regular freedarko reader, you know that JR and Gilbert are their patron saints, even moreso than Darko himself. Looking forward to their upcoming classic on those topics today. If they so choose.

Lang and I are headed out to Cleveland tomorrow. If it’s a sweep, it’s a nice three-day trip, two NBA Finals games to watch, seeing the champion crowned, and enough free time to do some other stuff (ROCK AND ROLL HALL OF FAME!!! That didn’t need to be all caps.). If the Cavs can win a game, we’re there until Sunday night. We will be loaded with coverage, much like Lang and the Bens were over this past weekend.