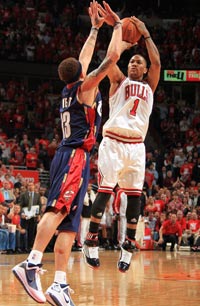 Here we go, ready to count down the top 25 players in the mid-range area, the part of the game that is a so called “lost art.” Before we jump straight in to the rankings, though, the criteria for this list has to be examined in advance.

Before creating this list, I went through all of the active players on NBA.com and wrote down the guys who I expected would be top 25 mid-range players in today’s game. Additionally, by checking out hoopdata.com, I glimpsed the mid-range — 16-23 feet — depth shooting numbers to put some fact behind my opinion. A lot of the obvious players initially were good to stay, but a further look at a few players (I.e. Paul Pierce and his surprising 38 percent on just 2.4 attempts) took them out of competition.

Another stat I took in to account was the amount of shots converted off of assists in that range. This area has added importance because if a player makes a decent amount of his shots off the catch, in rhythm, it shows that the team is willing to run plays through this player because he is talented there. On the reverse side of this is the point guards, like Chris Paul and Steve Nash, who create almost all of their attempts in this region and deserve some credit for their shot creation and selection abilities.

But this list isn’t all about numbers, and that will show. One player is near the top of the list because his numbers are good enough and he has such a ridiculous repertoire that he uses to make his shots in this area. In the end, some of the calls were judgment calls but one thing is certain: The guys on this list all have talented mid-range games that help their team win. This forte makes them much more difficult to guard in the grand scheme of things.

25. OJ Mayo | Memphis Grizzlies | 1.6 makes/game | 53.8% assisted
Mayo has always had an advanced pull up game, as he combines his good size with a quick and skilled dribble to get his shots up. Mayo is a very good isolation player who is capable of taking a shot over almost any defender, but the key for his mid-range game is figuring out which shots are his best ones to take during games. Mayo, like other stars, has the ability to hit tough shots from the perimeter but he could move up this list in a big way if he learns the value of shot selection a bit more, which would help him to improve upon his 40 percent shooting and 1.6 makes per game.

24. Ray Allen | Boston Celtics | 1.2 makes/game | 78.9% assisted
Ray Allen also has a side of mid-range to go along with the main dish of 3-pointers that he serves up every night. This season Ray-Ray hit 45 percent from mid-range and made 1.2 shots per game while converting assists on nearly 80 percent of his makes—a sign that he played within the offense and took shots as they came to him.

23. LaMarcus Aldridge | Portland Trail Blazers | 2.1 makes/game | 74.5% assisted
A great spot up shooter from the mid-range, Aldridge converted assists on 75 percent of his spot up makes from the 16-23 foot range last year while making 2.1 per game. Believe it or not, that 75 percent is actually a four-year low for the power forward from Texas on his jumpers, meaning t

hat he might be comfortable putting the ball on the floor, taking a dribble or two and then shooting the jumper. Either way, Aldridge seems to be a mainstay on this list for years to come with his improving jump shooting ability.

22. Chris Kaman | L.A. Clippers | 1.7 makes/game | 90.2% assisted
Kaman spends a lot of time playing the pick-and-roll in the Clippers offense and that is one of the main reasons that he is open to take just over 4 shots from the mid-range area per game. The other reason is that he is good at spacing the floor on drives and is an above adequate shooter from the baseline. Although he doesn’t have a fancy repertoire, Kaman gets the job done from the mid-range by knocking down 1.7 shots per game, a clip of 42 percent.

21. Kevin Durant | OKC Thunder | 2.2 makes/game | 54.2% assisted
He can punish you in so many different ways. One way that is still coming along is his mid-range. He might still be refining his game (he’s 21, for god’s sake) but when he catches the ball after coming off a screen and curls to face the basket, just book it. Durant moves around like a taller Reggie Miller on the floor and wiggles his way to openings without the ball. The small forward shoots 37 percent from the mid-range and averages just over 2 makes per game, both of which are bound to improve in the coming years.

20. Joe Johnson | Atlanta Hawks | 1.9 makes/game | 31.3% assisted
A sharp shooter from just about anywhere, Johnson is adept at using jabs initially to create space and then taking advantage of that space by pulling up on his man. He is an amazing rhythm shooter and he takes advantage of this by easing in to his jump shot at his natural pace very well. He has the ability to step back on his man and shoot tough fading jumpers from all angles (he better for the money he just signed for) with a fluid shot, which explains why he shot 40 percent with 1.8 makes per contest.