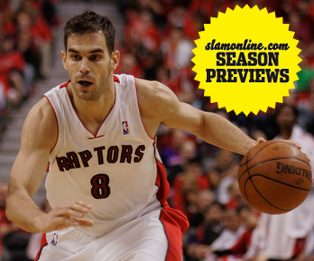 We conclude the Atlantic Division previews with the Toronto Raptors. You can read past previews here.

away in the weather patterns as last season progressed: optimism.

For as long as the franchise existed, optimism has been in the air that Raptors fans have lived on. From the promise of Damon Stoudamire, then Vince Carter and T-Mac and the on-the-cusp-ness (that’s a word, right?) that the team experienced in the early parts of this decade, optimism was the feeling du jour in Toronto. Even through VC’s self-induced demise, Raps fans had the promise of Chris Bosh to keep them thinking about tomorrow. The feeling skyrocketed with the arrival of Bryan Colangelo and the 47-win breakthrough campaign the team had two years ago and was there at the start of last season.

It’s not that the wheels fell off; it’s more like the car somehow got in serious need of an alignment on its journey. This team won half of its games last year playing in an improved Atlantic division, while dealing with the neck pains of TJ Ford and trying to figure out how to master the ying-yang effect of Ford and the continually blossoming Jose Calderon. Andrea Bargnani, another source for optimism this time last year, had become the personification of Twinkie filling by April. The talk all season had been a first-round playoff victory (“Let’s shoot for mediocrity—what could go wrong?”), but much like the plot of Wanted, you could guess how the Raps’ season was going to end halfway through the show.

Fast forward to the end of April, where one really quick first-round knockout later at the hands of a team that by all accounts wasn’t that good and you’ve got a good but not great team that aimed for the middle of the pack and fell short. Which left Colangelo at a not so interesting crossroads as the off-season stared him in the face.

With one felt swoop, though, BC made a move that encapsulated and reinvigorated the Toronto experience, when he shipped Ford and Rasho Nesterovic to Indiana for Jermaine O’Neal. This move isn’t exactly Ron Artest to Houston, but in my mind it put everything back where it’s supposed to be in Raptorsland (which is a cool place. There’s a statue of Charles Oakley).

Bringing JO into the mix doesn’t give this team answers off the bat. It does mark the return of a string of ifs that, should they all be checked off as the season progresses, will see the Raptors take the elusive next step that’s eluded them from Day One. It’s kind of like a real life version of Keno.

‘Ifs’ In The Front Court

JO is the first and biggest if on the list. If his knee is healthy, this season could be O’Neal’s redemption song. The guy’s been working his ass off this summer, saying all the right things. If he does the right things (I’m thinking around 15 and eight per, while altering shots and giving Toronto a presence in the paint besides Chris Bosh), this team (the Bosh-JO tandem in particular) could become the talk of the League.

If O’Neal works out for the Raps, it’ll open up the door of improvement for Andrea Bargnani. A year removed from a strong rookie season, Bargnani remains an if for the Raptors. Thrown into the paint last year, the big man (in stature, at least) struggled. He says the four-spot is his natural position, but this is a guy that needs to play on the wing if he hopes to thrive and avoid having his label switch from if to stiff. A front line of Bosh, O’Neal and a productive Bargnani at the three is physically huge and would boast a diverse attack. Plus, it’d be a lot of fun to watch.

Two iffy players may surround him at the moment, but there are no questions with Chris Bosh. Coming off of another all-star season, you know what you’re getting with the cornerstone of the franchise: a versatile 20 points (I never thought he’d successfully add a three-point shot to his game) a good 10 boards and around 10 games lost to plantar fasciitis. If there was anyone left in the basketball world that was still sleeping on Bosh, they saw a short-shift version of what Raps fans have been seeing for the last five years.

While the ifs outweigh the guys you can count on night in and night out, one other guy I think will continue to step up is Jose Calderon. Last year at this time, just about everyone thought it would be Bargnani that would come into his own, but it was Calderon who surpassed the flashes of potential he started showing two years back. With Ford shipped away and Calderon freshly inked, the reins are squarely in his pass-happy hands. All that’s left to do now is sit back and watch one of the purest points in the League go to work.

True to form, Bryan Colangelo (or maybe it was Maurizio Gherardini) scoured the international scene and plucked a handful of new players who have hopes of being the team’s next Anthony Parker or Jamario Moon. Hassan Adams and Will Solomon are both American-born players, returning to the L after putting in time overseas (Adams in Italy and Solomon in Turkey). Adams will look to help out Parker in the guard/forward spot, while Solomon will help out Calderon at the point. Two true foreigners are in the mix this season in Toronto as well, in Australian big man Nathan Jawai and finally, after a three-year wait, Croatian two guard Roko Ukic will put on a Raptors jersey for the first time. The guard-types should get plenty of time to show what they can do (this could be your curtain call, Joey Graham), while Jawai will look for minutes behind Kris Humphries, Bosh and O’Neal. Situations like this remind me of a high school coach throwing a ball out on the floor during practice and screaming at the kids on the baseline to go get it, inciting what basically gets reduced to a wrestling match at center court.

With O’Neal helping Bosh out in the paint, the team’s rebounding problems should finally subside. A look at the team’s top scorers shows the next problem, that being that the team didn’t have a reliable second scorer last year (try as TJ Ford might have). O’Neal might be the answer there, but it’s a question that’s going to hang over this team until someone steps up and fills the void. It could also be filled by bringing in the quality shooting guard that the Raptors have needed for years. Until free agency rolls around in 2009, though, the Raps will have to get by with Jamario Moon and Anthony Parker splitting offensive and defensive duties against talented players just about every night they take to the court.

The off-season moves made in Toronto weren’t through the roof exciting, but they’re enough to bring hope back for the fanbase, and probably the players too. Pending all of the pieces falling into place for these guys this year, the team should be improved enough to reach the Promised Land. Not that promised land, just the hallowed grounds of playoff advancement. Let’s not get too crazy here. It may be back, but everyone knows the optimism is of the guarded variety.