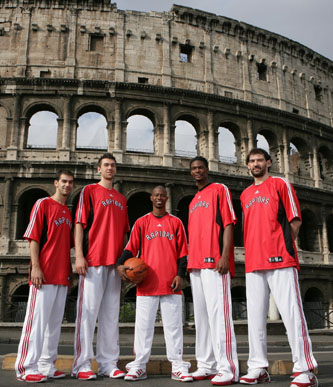 A few weeks ago, I stopped into one of those big box electronics stores, trying to find a way to justify throwing some money away at something I couldn’t afford. As I debated whether or not my scratched-to-hell iPod needed a protective case, a huge flat screen HD TV caught my eye. It wasn’t the size of the TV, its insane picture quality or the multi-speaker system that came with it that pulled me in, though. There on the TV was a highlight package put together two years ago from a Raptors-Cavs game. As I watched King James and the Cavs pick these Raps of old apart, it was here that I gained a full appreciation of what happened last year in Toronto.

Two years ago, the Raptors were a bad team. A really bad team. It’s not that they were underachievers, because to be underachievers you have to have some recognizable amount of potential that you’re not living up to. Toronto didn’t have that. They were just really f*cking bad. So for the Raptors to be what feels like light years removed from that just a year later says a lot about how far they’ve come.

No one could have forecasted the Raptors having the season that they did. They maxed out every best-case scenario imaginable and answered every question that hung over them a year ago at this time. The Euro-heavy roster that was full of new faces was able to gel quickly enough to stay above water. Sam Mitchell kept his job. The TJ Ford trade didn’t look like a bad one for a minute. Andrea Bargnani looked more like the next Dirk than the next Darko. Not only did the Raps make the playoffs, they won their division and had home court in the first round of the playoffs (not that it mattered, but still).

Throw in a 20-win improvement, Chris Bosh making the All NBA second team, Coach of the Year honors for Sam Mitchell, and Exec. of the Year to Bryan Colangelo, and you’ve got a franchise transformation that every garbage team in the League wants to emulate.

And with all that said, it’s time to move on and look forward. The Raps took a lot of teams by surprise last year. This time around, teams will be ready for them, and what the opposition will be getting isn’t too much different, talent-wise, from last year’s squad. Gone is Morris Peterson, the team’s longest-tenured player, to a situation in New Orleans where he’s hoping to get some consistent minutes, something that eluded him last year.

Toronto hopes to replace Mo Pete’s contributions with the sharp-shooting Jason Kapono. Not only is Kapono a 3-point shooting champion (and that’s really what it’s all about, isn’t it?), he’s got championship experience from his stay in Miami. And because it wouldn’t be a successful off-season if the Raps didn’t bring in another non-American player, Argentinean Carlos Delfino gets into the mix this year, after Colangelo traded two future second round draft picks to the Pistons for the two guard. Joining Kapono and Delfino are Maceo Baston from the Pacers, D-Leaguer Jamario Moon and Greek import Giorgos Printezis, San Antonio’s second-round pick, who the Raps got from the Spurs for Toronto’s 2008 second round pick.

Will they make a difference on this team? I think they will, and the only way I can explain it is to go into a theory I like to call (and for the record, didn’t conceive) The Raptors Force Field of Success.

On March 23, Allen Iverson and Carmelo Anthony led the Denver Nuggets into Toronto. As well as the Raps were doing up to that point, no one expected them to put the ungodly smackdown that they put on their guests. The Raps came out of the gate with a fourth quarter intensity and instantly blew the game open. The game was decided after the first half, and they went on to win 121–94.

In his writeup on the game, the Globe and Mail’s Michael Grange suggested that it was like there was a force field surrounding the court that allowed every player that entered the game that night to reach their full potential. While the Raps aren’t going out every night and putting 120-plus on the opposition, what Grange mentioned in passing may be the key to this group’s success—for last season, the present and in the future. Whether it’s coaching, team chemistry, the leadership of Bosh, a combination of all of the above or simply a magic force field that measures 94’ by 50’ (stopping juuust in front of Chuck Swirsky’s announce table), every player on the Toronto roster gains the basketball smarts and abilities needed to succeed in the NBA as soon as the ball goes up in the first quarter.

So with the same core players and the only new faces sitting at the end of the bench, how does the situation look for the reigning Atlantic division champs this year? I like their chances. Sure, the teams in their division improved, especially that three-headed monster in Boston that’s generating a lot of buzz right now, but the Raps are young, talented, selfless, and provided they stay healthy, are going to be a better team this year.

It starts with Chris Bosh. Plantar fasciitis forced the big man off of the US team this summer, but it’s nothing new for him. Bosh has been dealing with the problem for over a year now and says that at present the pain is minimal. Even if he replicates his effort from last season, it should be enough to anchor the Raptors on both ends of the floor. If his foot isn’t bothering him, expect his numbers to climb even higher (25 and 12?).

Andrea Bargnani showed flashes of brilliance in his rookie season and may have captured the Rookie of the Year trophy had his appendix managed to keep quiet until the season was over. As the Raptors’ announcing team of Chuck Swirsky and Leo Rautins rammed down Canadian viewers’ throats last season, the seven-footer’s rookie campaign was a better one than Dirk Nowitzki’s. If Bargnani’s second season is as good as or better than Dirk’s second season, the Raptors will be laughing for years to come. Dirk’s averages went from 8ppg as a rookie to 17.5 per in his second season. Just how much Bargnani can improve this season plays a big part in the Raptors’ success this year and down the road. A significant jump in his scoring and rebounding will not only add a legit second threat to the team’s offense, it’ll also take some of the pressure off of Bosh and help preserve him through the season. Bargnani could also have the same effect on another teammate who’s not fully healed up yet, in Jorge Garbajosa.

The status of Garbajosa’s nasty ankle injury remains an issue heading into the season. As we all know, Garbo went against the Raptors’ advice and tested his ankle playing for Spain in the European championships. If you’ve ever played on an ankle that’s not 100 percent, you know how easy it is to re-injure it. With the day-to-day grind of the NBA season, the chances of something happening to his ankle are high. If Bargnani is improved enough, his increased role on the team will allow Garbajosa to take a seat and rest an injury that seems destined to be corrected by anesthetic, a scalpel and some other medical tools that I don’t know the names of.

Assuming that force field stays with the Raptors this year, their bench should continue to play above their heads, from super-backup Jose Calderon to fill-in big man Kris Humphries. Here’s hoping that Calderon can make it through the season in Toronto, as just about every team in the League is after him to be their backup point man.

Prediction: Progress takes root in different forms. If they don’t win another banner or get that franchise-best 48th win this year, the season’s not a wash. A healthy Bosh and an improved Bargnani will drive this team forward in the season that matters. I’m guessing 45–50 wins and a trip to the illustrious Eastern Conference Semifinals. If Chuck Swirsky never says “Oh my Bosh!” again, even better.