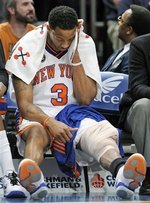 The more things change, the more they stay the same. Welcome to T-Mac’s life, and that of the Knicks.

Following an electrifying debut in a Knicks uniform on Saturday night, during which he poured in a season-high 26 points, T-Mac asked out of the game last night when he could no longer bear the pain in his surgically-repaired left knee (a knee, mind you, he had been rubbing on the bench during his Knick debut).

What little hope McGrady may have generated in his scintillating debut all but disappeared with the injury last night, to say nothing of the Knicks’ totally deflating loss to Milwaukee.

Tracy McGrady’s comeback took a troubling turn when the new Knick limped off the court in the final minutes of his second game. The cursed Knicks limped to a horrifying 83-67 loss to the Bucks and were booed off the court by a surly Garden crowd after scoring their season low. McGrady said afterward he knocked knees twice and wouldn’t guarantee he’ll be healthy enough to face the Celtics tonight in Boston.

“Hopefully it’s not sore [today],” McGrady said. “Maybe I’ll lace them up and play, but we’ll see. We’ll see how it feels before the game … In the first half, I knocked knees with somebody. I didn’t really feel it until I came in here and sat 15-20 minutes and went out,” McGrady said. “Toward the end, I banged knees again. Coach saw me limping, so he pulled me out.”

Tonight’s game — with the Knicks visiting Boston — has a chance to be something special, as Eddie House and Nate Robinson face their former squads, but with T-Mac’s health up in the air (on a back-to-back, no less), Knicks fans probably shouldn’t hold their breath for something too positive to take place.