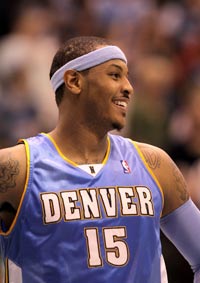 Dang. Well, so much for Miami Heat swingman LeBron James causing a stir that was relative to his own former team’s demise — he’s been responsible for not only Chris Paul’s vacillations about leaving the New Orleans Hornets, but his Three Musketeers move has now gotten Denver Nuggets forward Carmelo Anthony into the act and now, he’s sent word that he’s looking to go elsewhere (yeesh). With that out of the way, the Trader’s Market is going to see how Carmelo Anthony might best fit in with a number of teams that could make good trade partners with the Nuggets and maximize his own skills to win big.

I’ll be the ultimate GM here, with the help of ESPN’s Trade Machine.

Obviously, if Carmelo goes to the Knickerbockers, it would mean instant excitement and an improved level of play all-around. Pairing two frontcourt scorers in Anthony and Amar’e Stoudemire would mean a lot in terms of scoring (although man-to-man defense might be a shortcoming, to be nice). Having Raymond Felton be able to pass the ball to two people who can draw double teams would open up the floor for penetration, and I’d assume that since the Knicks wouldn’t have to give up Danilo Gallinari in this deal, he could spread the floor next to the All-Star forwards at shooting guard, small forward and power forward, giving Mike D’Antoni a Phoenix Suns “East” kind of roster. It would mean that the Knicks would finally make some noise in the Playoffs, which would be good enough for a few seasons alone.

In Denver’s acquisition of the New York trio, they’d have a great opportunity to compete in the West, getting significant cap relief from Curry’s contract in the following year (should they let him play out his contract), feeding a future All-Star (Randolph) with plenty of good minutes and teaching by a world-class coaching, and then being able to also acquire a young wing player who can score, defend and be a model teammate in Chandler. The Nuggets wouldn’t be a top-seed team in the Western Conference right away, but the increased flexibility would give Denver the opportunity to be players in the trade market and continue to set a good pace toward the Playoffs, which would still be a relative win, considering that Melo’s teams didn’t usually get much farther than the first round most of the time anyway.

The Nets would instantly gain some credibility and a very promising base in Melo’s acquisition. With All-Star point guard Devin Harris, cornerstone center Brook Lopez and No. 15 filling the lineup nightly, wins would come. Without even mentioning the merits of new coach Avery Johnson leading the team, scoring and defense would come at a premium, and Johnson would demand the very best out of Melo. Losing Murphy would be unfortunate, but with Kris Humphries ready to make his mark and keep top draft pick Derrick Favors on the bench, the Nets would be alright.

As for the Nuggets, along with getting Williams and Murphy, I’d say the inclusion of two future first-rounders would do the deal nicely for Denver as well. As with the aforementioned Denver-New York deal, the Nuggets would get some good cap relief from the incoming contracts. Murphy would give the team a very good post presence as a scorer-rebounder and a youngblood in Williams would provide some more energy and athleticism as he grows into a scoring threat under the guidance of All-Star point guard Chauncey Billups and coach George Karl.

(Part 2 will be coming soon as well.)

Sandy Dover is a novelist/writer, artist and fitness enthusiast, as well as an unyielding Prince fan (for real). You can find Sandy frequently here at SLAMonline, as well as at Facebook, Associated Content and Twitter.