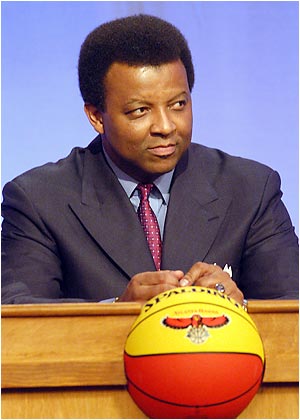 Wow. Two days past Vegas and I’m still worn out. And it gets better: I’m leaving tomorrow night on an international flight and will be overseas all weekend, working on something for the next issue of SLAM. Where you at, sleep? What!

If you didn’t read Sam’s Vegas Odyssey, you should because it’s hilarious. We really had a great time, and it was a blast to travel with Ben, Sam and Khalid. I’m hoping the NBA gives Vegas and expansion team and allows them to add any player from any basketball team in the world to that team, just so the team will be amazing and we’ll be able to travel there as often as possible.

• Got my first copy of the next issue of SLAM (issue number 107) today. Can’t tell you much about it but you’ll hear plenty on this soon.

• Sam informed me earlier today that I’d won a Lifetime Achievement Award from Dan Shanoff’s blog. And sure enough, I did. I’m mostly excited about this because now I can honestly say I write “an award-winning” column. Thanks, Dan.

• While heading back out on the road so fast sucks, I’m more upset that I’m going to miss tomorrow’s annual news and rumor derby that takes place around the 3 p.m. trade deadline. I love sitting at my desk on that day, making calls and trying to get at the truth. It seems that this year, though, is different. There haven’t been nearly as many rumors as usual, and even out in Vegas things were mad quiet.

I’ve talked about this before here, but it remains true: If an NBA GM is faced with a choice of making a move or not making a move, 9 times of 10 he won’t make the move, for fear that it won’t work out and he’ll lose his cushy job. For instance, as I watched the Hawks go 0-for-The Third Quarter last night against the Bulls, I found myself sitting there wondering how in the world Billy Knight can justify not making a trade for the Hawks. You’re telling me there’s really no player available in the entire NBA that wouldn’t make the Hawks a better team? Really? Or is your franchise just paralyzed by fear and afraid they’re going to screw things up even worse?

The good thing about the upcoming deadline is that the Nets and Grizzlies are both being prominently mentioned and both franchises are under a little upheaval (one’s up for sale, the other’s on the move), so maybe the teams won’t be scared to try and shake things up and save some money.

• Look, I hate to dry snitch on Rod Thorn, but I sat behind him on the plane all the way from Vegas to Phoenix to New York City. And for him to say the Nets have “nothing, not at all” on the horizon seems a little disingenuous. That’s all I’m saying.

What I don’t understand is all this talk about the Nets moving Jason Kidd. Sure he’s having off-court issues and he makes a ton of money, but if you’re really going to rebuild, wouldn’t you keep JKidd and rebuild around him? Kidd’s greatest asset as a player is his ability to make the people around him better players, and if I was running the Nets I’d try to keep Kidd and move Vince for some young guys who will actually drive to the rim.

• Shaun Livingston made a move last night where he went through the legs and then spun the opposite direction and freed himself up for a little jumper in the lane. It was so nice that I actually gasped seeing it on TV. If I was any of these bottom-dweller teams, I’d go after Livingston hard and give up whatever they want. I know he’s injured frequently and he really hasn’t been able to take over the point for the Clips, but perhaps he just needs a change of scenery. If I was an Eastern team I’d go after him and throw him out there for 35 minutes a night until it clicks.

And Corey Maggette…he’s a good player, but isn’t he just more trouble than it’s worth? After all, he’s a complementary guy who can’t play a complementary role, who is always complaining and moaning and in the papers all the time. Just move him and get it over with, Elgin.

• The Lakers have been active in all this, with Jason Kidd’s name being frequently attached out West. I understand the appeal of adding Jason Kidd to your team, but if I’m Jersey there’s no way I want Kwame Brown in return. Sorry, Kwame. Give me Bynum, Farmar, and at least two first-round picks. Otherwise, no way.

• Jamaal Magloire’s available? Really? Wow, can’t believe anyone would want to move him.

• It sounds like Pau Gasol ain’t moving nowhere, which is probably smart for Memphis. Once they get Kyle Lowry healthy and have that inside-outside Gasol-Gay (no Amaechi) combo going, they’ll be significantly improved. And if they can manage to keep losing games this season by not playing any defense, they’ll have a good shot at adding Oden or Durant this summer, which will suddenly make them one of the best young teams in the NBA.

• I heard that Toronto wouldn’t mind adding a rebounder, which would allow Bosh to concentrate more on offense. I also don’t think MoPete will be on the move, since he’s historically a better second-half player than first-half performer.

• Once again the T-Wolves look like they’re going to stand pat. I heard chatter at All-Star that things might not change there until this summer. And if that’s the case, it seems almost perfect that GM Kevin McHale would stand by and not do anything as the team slinks their way to another postseason without a postseason.

• One team that’s been stragely quiet has been the Heat. If anyone’s not afraid to do something drastic and shake things up just before the deadline, it’s Miami.