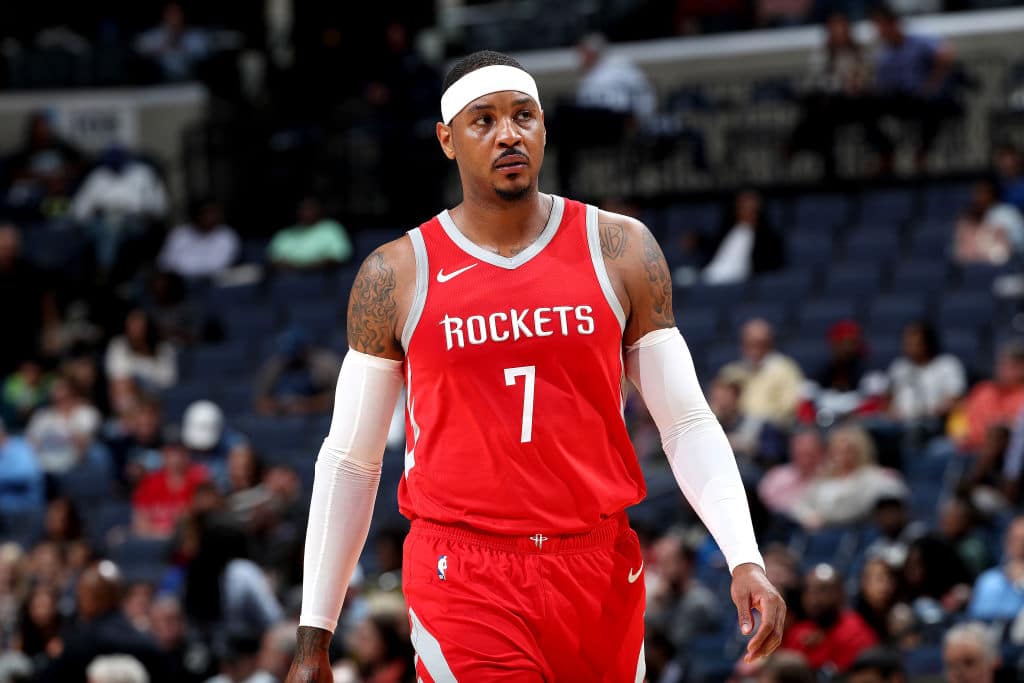 Update #1, Nov. 19: Carmelo Anthony has signed his deal with the Blazers, Shams Charania of The Athletic reports. The deal will be worth $2.2 million over the course of the rest of the season (prorated veteran’s minimum) and he’ll wear #00.

According to Chris Haynes of Yahoo Sports, Anthony will be activated for Portland’s Tuesday night contest.

The Portland Trail Blazers intend to sign Carmelo Anthony to a non-guaranteed deal, Adrian Wojnaowski of ESPN reports. Anthony has been out of the league since he was traded by the Houston Rockets last season.

ESPN’s Bobby Marks adds that Anthony’s deal will become guaranteed if he remains on the roster through January 7. He’ll join the squad for their upcoming road trip, Wojnarowski adds.

Portland’s interest in Anthony has been well documented but the forward didn’t appear eager to sign on with the squad when presented with opportunities to do so over the years. Now, as the short-handed Blazers struggle to fill vacancies created by players like Zach Collins and Jusuf Nurkic, Anthony represents a potentially solid replacement.

Anthony will be in the mix for reps at the four with Mario Hezonja and Anthony Tolliver.

Chris Haynes of Yahoo Sports reports that Blazers guard Damian Lillard was notified of the move last night and has always been supportive of bringing Anthony to town.

Given that the Blazers already had a roster spot open, they don’t need to make any moves to facilitate the signing. They are, however, a team already deep into the luxury tax that will now be in line to pay considerably more with an additional player on board, especially if Anthony ends up sticking around for the duration of the 2019-20 campaign.

While Anthony held his own in ten contests with the Rockets in 2018-19, two of them starts, the team opted to cancel the experiment and traded the former All-Star to the Chicago Bulls. The Bulls promptly released the 35-year-old and he’s been on the outside of the league looking in since.

While Anthony didn’t latch on with a team throughout the offseason, it wasn’t because of a lack of interest. At various times through the summer Nets players were advocating for their squad to sign the veteran and the Knicks alluded to the notion that they’d have reached out to Anthony if their initial, more ambitious free agency plans had come to fruition.

To his credit, Anthony has remained committed to returning to the league and apparently kept himself in good enough condition through mid-November to convince a team to give him another shot. Last week he re-iterated his interest in playing again.

Having bounced around several franchises since he was dealt by the New York Knicks back in 2017, all eyes will be on Anthony as he looks to help jumpstart a Blazers squad that’s limped to a 4-8 start this season.