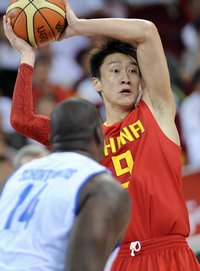 The Triangle Offense has never been considered any easy system to learn, especially for newbies. With a complex strategy based on reading defenses, spacing, cuts and precise timing, Tex Winter’s baby has given all kinds of players geometrical nightmares over the years. Even battle-tested veterans.

For rookies, though, the Triangle has generally proven to be murder. Enter Sun Yue, the Lakers’ heralded rookie point guard. He ain’t scared of no Triangle Offense; he’s watched that crap on television for years.

“The Lakers were always my favorite team,” he said during his introductory news conference Wednesday afternoon.

I wish they had a camera trained on Winter’s face so as to catch his reaction when the rook said that.

In all seriousness, though, Sun Yue said all of the right things in his first pow-wow with the media, and showed the requisite amount of humility when it comes to playing time expectations.