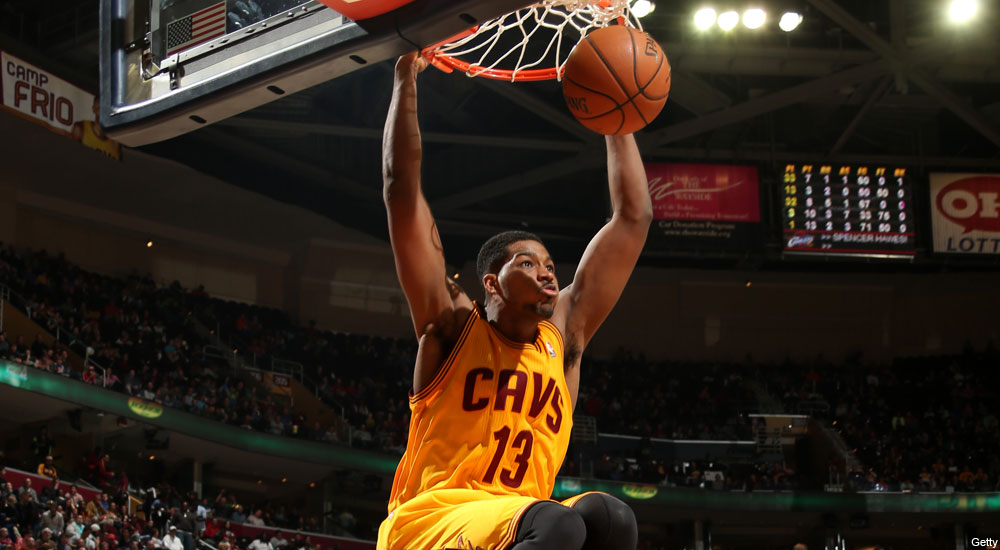 Tristan Thompson has started 164 straight NBA games over the last two years. He’s posted 67 double-doubles during that stretch, averaging 11.7 points and 9.3 rebounds. Despite the consistent production, however, the 23-year-old big man enters his fourth professional season as one of the Cleveland Cavaliers’ biggest X-factors.

If Thompson is able to excel in his new role alongside LeBron James, Kevin Love and Kyrie Irving, he could become a major reason why the Cavs are able to eventually compete for a Championship. To prepare himself for that next chapter of his career, the Toronto native has spent his offseason improving his game while working to become a more efficient player around the basket.

“I’ve been continuing to work on finishing around the rim this summer,” Thompson told SLAM. “That’s something I looked at after the year as an area I can improve on—finishing around the rim with quick finishes. Sometimes you can’t dunk everything. So you have to get some quick finishes, and finish in different ways around the rim. I’ve also been watching a lot of film and working on becoming a better player defensively. I feel like I can be a key factor for our team this season in those areas.”

This past weekend, Thompson linked up with teammate LeBron James and All-NBA point guard Chris Paul for a workout session at UCLA. While there, he was able to observe some of the work habits that help make those superstars great.

“The thing I notice most working out with LeBron and Chris is how efficient they are in their workouts,” Thompson said while on set with Klutch Sports Group for a screening of LeBron’s television series Survivor’s Remorse. “A lot of guys tend to think that if you work out for two hours straight, or an hour-and-a-half straight, basically working on everything, that’s the right way to do it. But sometimes you’re overexerting your body that way.

“For those guys, entering their 10th and 11th year in the League, they’ve been through it so long and they’re efficient with their work. They go in there for an hour and work on exactly what they’re going to work on that day. They’re in the exact spots on the floor they’re going to be most effective during the games. That’s something us younger players need to observe. That’s how you keep your body fresh, keep that longevity going. You go 82 games, plus Playoffs. That’s a long season.”

Since being selected fourth overall out of Texas in 2011, Thompson has yet to compete in a Playoff game for the Cavaliers. That’s expected to change in 2015 after a monumental offseason, and Thompson’s preparing his mental approach accordingly.

“With the team and players we have this year, defenses are going to pay so much attention to them,” Thompson explained. “When LeBron, Kyrie or Kevin Love make their move, defenses will be sunk in, which is when myself and other players on the team can get to the rim and finish. So for me, my approach is simple; I call it, ‘see ball, get ball’. I am going to put myself in a position on the court to rebound the basketball well for our team, then finish around the rim while also making an impact defensively.”

Exactly what role Thompson will be asked to embrace in Coach David Blatt’s new system won’t ultimately be determined until training camp is underway. But there have been reports indicating that he could log significant minutes at the center position, in addition to spending time at power forward.

“I’m a basketball player at the end of the day,” Thompson said. “I have experience playing the center position. I’ve played center, I’ve played power forward, but I’m really just a competitor. When training camp starts, I’m going to come out and compete. Wherever Coach Blatt feels I’ll be most effective for our team in terms of winning, that’s the role I want. Winning trumps everything at the end of the day for me.”

It’s that attitude and professionalism demonstrated by Thompson ever since arriving in the NBA—along with his athleticism and work ethic—that helps make him a unique fit for a team with title aspirations. After starting every game at power forward last season, he’s embracing the opportunity to play alongside perennial All-Star Kevin Love, even if they technically play the same position.

“Me and Kevin have been texting back and forth,” he said. “We’ve just been building that relationship as people first. But the way he plays the game, there is no reason why we can’t play together. He’s a stretch-4 who gets a lot of attention from shooting the three so well. And when he’s on the block, you have to double-team him down there. If you don’t double him, he’ll score or get fouled. And he’s a heckuva passer too. So I’m excited to play with a guy like that, especially on the perimeter picking and popping. That should leave the paint open for rebounding or a basket down there. I think we can complement each other and play off each other pretty well.”

Love wouldn’t have arrived in Cleveland if not for the commitment LeBron made this summer to the Cavaliers organization. But despite Thompson’s long-standing friendship with James, he found himself feeling like any other Cavs fan when ‘The Return’ became official.

“There were a lot of text messages and tweets blowing up my phone when LeBron announced he was coming back to the 216,” Thompson recalled. “It was great for Cleveland, great for Northeast Ohio, and great for everyone in the Cavaliers organization having him return. He’s done so much for the game, had so much success on all levels of basketball. It’s exciting to be a part of this.”

Thompson added that he’s most excited for Cavs fans, who continued to support the team during some difficult times over the last few seasons.

“The people of Cleveland and Northeast Ohio have been loyal ever since I’ve been drafted to the Cavs. So they definitely deserved it. When he decided to come back and return, I was most happy for them. All the loyal fans that came to the games when we were on five-game losing streaks, seven-game losing streaks. This season is for them. Our work is not done by any means; we have a long, long way to go. Everything looks good on paper but that doesn’t count until the ball is tossed up and you play those 48 minutes. But it’s an exciting time in Cleveland right now.”

As far as contract extension talks for the member of the 2011 Draft class, Thompson says that detail is the least of his concerns right now.

“I’m just focused on training camp and getting the season started,” he said. “I’m excited for the season. I’m not worried about any of that stuff. It’s not even on my mind.”

What is on Thompson’s mind right now is winning. He’s looking forward to doing everything he can to help put his team in a position to win big this season. Along the way, he also plans to keep his fashion game at a similarly high level when arriving for work on a nightly basis.

“What can people expect from me this year from fashion standpoint?” Thompson replied to my question with a laugh. “Well, one thing you can expect is that I’m going to always be fly. You’ve been seeing that on Instagram, things aren’t gonna change. I’m not going to take a step back—I’ll put it like that. I’ll make sure I’m looking right and looking dapper.”

Cavs media day is Friday and SLAM will be live from Cleveland Clinic Courts with coverage throughout the day. We’ll have plenty more from Tristan and the rest of the Cavaliers then.