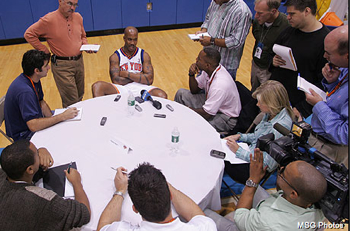 I am probably not the best person to be reviewing the debut episode of Stephon Marbury’s new talk show, “Stars on Stars.” My affinity towards Steph has long been documented here at SLAMonline.com, and I’ve never been a fan of Steph’s first guest, Kobe Bryant. But if I don’t go there, who will?

When I initially heard that Stephon Marbury was going to have his own talk show, I was a little concerned. For all of Stephon’s gifts, his ability to communicate has never been considered among his greatest. I guess you’d have to go into a Knicks locker room before a game to see what I mean. Every home game, Steph sits in front of his locker getting dressed with a blank look on his face. None of the beat writers approach him. Other players (Q-Rich, Channing Frye, David Lee) are always there and around, joking with the guys who regularly cover the team. Steph always appears completely unconcerned with playing this political game. He’ll still talk to the media — this is the time when I normally catch up with him — but for the most part he plays the part of a snarling pit bull and everyone just leaves him alone.

Perhaps this is the equivalent of a football player putting on his game face before kickoff. Either way, it has not been helpful to Stephon’s relationship with the New York media. In New York Times review of “Stars on Stars,” Steph is described as having a “dyspeptic, combative demeanor.” Any public relations pro worth their salt will tell you that Steph could easily generate some goodwill by simply losing the ice grill for about 5 minutes and telling a few anecdotes before going out to warm up, but Steph has never played that game. For better and worse. As much as I’ve always appreciated the way he plays basketball, I’ve also appreciated the way he stubbornly refuses to play the public relations game. Could he have handled situations differently throughout his career? Sure. But the fact that he didn’t handle things differently spoke volumes about his drive and desire. And I liked that about him.

But giving Steph a TV show where he’s the host? Even I was a little worried about this. The thing is, I’m pretty sure I know more words in the dictionary than Stephon does. I’m also pretty sure that Steph would murder me in a game of 21. We each have our talents, and we make our respective livings exploiting those talents. When Stephon speaks, he’s generally best when expressing big, broad ideas through raw emotion and generalizations, not through descriptive metaphor. Which is fine. That’s the way Steph is.

How would this translate to TV? Not so badly, as it turns out.

I finally got around last night to watching episode one of “Stars on Stars.” The show began with a cold opening, and we found Kobe Bryant and Stephon Marbury sitting on a pair of adjoining love seats. Kobe was dressed down, wearing a black Nike sweatsuit. Steph wore jeans and a collared shirt. His sleeves were rolled up to the elbows and a pair of sunglasses dangled from the collar of his shirt, as though he’d just walked in from driving down the 405 in a drop-top.

The show began with talk about family. Kobe went on and on about his wife and his children, and Steph talked about his kids as well and the perils of allowing your children to occasionally sleep in the bed with you. The subject then shifted to parents, and how, as Stephon put it, we may eventually become smarter than our parents, but we’ll never become wiser than them. Steph then told of how his parents taught him to combat sickness and bring down a fever by putting a potato in the bed. “It sucks the fever out,” said Steph, looking as though he knew exactly how ridiculous this sounded. When Steph shared this, Kobe chortled, stopped everything and asked Steph to repeat the story. Steph did, and the two ended up laughing, genuinely laughing. When was the last time you saw two people on a TV show actually crack each other up, unscripted, without a laugh track?

They eventually got around to basketball. I’ve seen Kobe interviewed maybe 100 times, so this could have very easily been tedious, but I thought it was interesting. When Stephon asked Kobe about his 81-point game, Kobe claimed he didn’t feel like he was in the zone during the game. Steph rightly interrupted him and called him on this, his eyes bugged out: “You didn’t feel like you was in the zone?” Kobe quickly amended it and said he did feel like it in the fourth quarter. Also interesting was when Kobe said his favorite basket of the game was a two-handed dunk that ended the third quarter, because it tied the game up and, according to Kobe, with that dunk he could feel the life being sucked from the Raptors.

The show was a mix of casual moments — Steph admitting he knows how to iron clothes, Kobe admitting he goes to the grocery store all the time to pick up diapers, pacifiers and “binkies” — and basketball talk. There was a lot of discussion about their Draft class from 1996 and how several of them received max contracts. Steph recalled his amazement upon hearing of Kevin Garnett’s contract, and they laughed about how the NBA had to put the salary cap in place or else their class would have “hit” the NBA for a lot of cash.

I felt this episode of the show worked well, mostly because the guest was Kobe Bryant. In front of the cameras, Kobe’s as smooth and polished as a diamond, and he and Steph obviously have a lot of shared history. So when Kobe talked about being “old,” even though he’s actually just 28 years old, Steph knew exactly what he was talking about, and this led to a series of stories about having to ice down after every practice.

In the New York Times review of the show, Richard Sandomir asserted that Stephon needs a lot of work:

Marbury has much to learn about being a host. His role is to guide and cajole, not be guided. He needs to be less in awe and more in control. He needs help with his grammar if he is to be the central authority of the series.

He needs to prepare his questions more carefully rather than appear to think them through as they are emerging from his lips.

His speech is peppered with the verbal tics of everyday talk: he says “like,” and “I mean” a lot. If he wants to banish those verbal enemies, he needs a lot of off-the-air practice, but this series is on-the-job training for a neophyte. He must be aware that someone as beloved as Magic Johnson was not prepared to be a talk-show host. Nor was Chevy Chase.

If you tuned into “Stars on Stars” in search of perfectly constructed sentences and finely parsed verbs, you tuned into the wrong program. Stephon obviously did not major in English in college. But is the show a grammatical train wreck? No. Look, I’m exposed to Hot 97 all day long here in the office. “Stars on Stars” is no worse than anything on the airwaves each day. It’s probably not the sort of speech regularly heard around the New York Times newsroom, but it does reflect the way a huge portion of the population speaks.

Some parts of “Stars on Stars” were awkward. The show’s set, for example, was a huge green screen, so Starbury and Kobe looked as though they were floating in space while photos and designs popped up behind them and the cameras zoomed in and out. Also, it wasn’t a hard-hitting interview. Steph never brought up Shaq, never brought up the Colorado thing, never asked about Kobe disappearing during Game Seven against Phoenix.

But I don’t think that’s what the show was going for. Steph has positioned himself as a sports version of Barbara Walters, content to sit around and chat with other celebrities and expose something of their personality we likely wouldn’t see otherwise. And Kobe came across as real as I’ve ever seem him. Steph will be criticized for going too heavy on personality and not paying enough attention to actual news, but have you ever watched the interviews on “Rome is Burning” or that Ahmad Rashad show on NBA TV? There’s really not that much difference here, except that this show has a decidedly more urban bent.

Is “Stars on Stars” a great show? No. Is it a terrible show? No. I’ll watch it again, and I’m sure it’ll be interesting when the guests have something worth saying. Upcoming shows featuring people from Mark Cuban to Kareem Abdul-Jabbar sound promising. That said, I’m particularly interested in seeing how Steph does with some of the more boring guests that have been announced, like Vijay Singh. If Steph can get anything entertaining out of Singh, I’ll be very impressed.