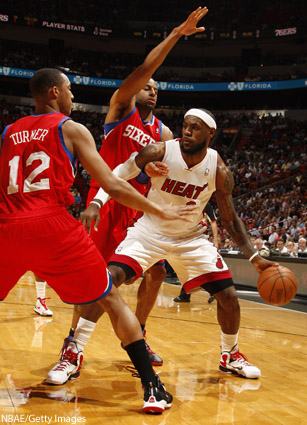 With the college game over and done with (word to Brittney Griner and Baylor), the NBA is ready to take center stage for the mainstream crowd—NFL Draft notwithstanding. But for the loyal readers of this blog, we all know it’s been pro ball from the jump, delayed as it may have been. So let’s get right to everybody’s favorite argument: Kobe vs. LeBron. Both had big nights in very different ways on Monday, so have at it!

When you’re a 7-win team that can’t buy a victory and you find yourself down 3 points with one final possession, you gotta give the ball to Byron Mullens. Wait, what? Mullens air-balled a 3-pointer with 11 seconds left, putting a comical final touch on what was actually a nice game by him (20 points, 14 rebounds, 2 blocks). I won’t bore you with any more from this battle of Eastern Conference bottom-feeders, but it’s worth noting that Andrea Bargnani scored 30 points while no Charlotte starter other than Mullens could manage more than 2 buckets.

Spurs guard Danny Green scored 19 points against the team that cut him prior to last season, Tony Parker matched his 19 and Patty Mills scored 20 off the bench as San Antonio won its 8th straight game in blowout fashion. Conversely, it was loss No. 8 in a row for the Cavaliers, who were outrebounded 46 to 27, outshot 59 percent to 42 percent and had only one player score more than 13 points—Antawn Jamison had 15. The days when Cleveland once looked like a sneaky Playoff team are long gone—they’ve lost 17 of their last 21, the last 7 losses by an average of 22.3 points. The Spurs, who are 37-14 and now just 2 games back of Oklahoma City for the top spot in the West, scored 58 points in the paint against the Cavs, needing only 7 points apiece from Manu Ginobili and Tim Duncan to cruise to the win.

Just when Carmelo Anthony returns to superstar Melo status with a 39-point, 10-rebound game, the Knicks forget to play the fourth quarter and lose ground in the Playoff race. In the final period, the Pacers outscored New York 40 to 17, Danny Granger poured in 14 of his team-high 27 points and Paul George scored 12 of his 18, helping Indy close out the Knicks. Granger started raining three-pointers in the fourth, pulling the Pacers back in front after trailing for the entire third quarter—they trailed by 17 at one point in the second half. In a way, Indy’s win over the Knicks on the strength of hot shooting form beyond the arc was fitting, since one day earlier, legendary Knick-killer Reggie Miller was selected for the basketball Hall of Fame.

Average players go months years careers without dropping a 30-spot in an NBA game. For LeBron James, a 10-game streak without scoring 30+ is cause for revolt. Right on cue, The Chosen One broke out for a season-high 41 points, breaking his longest such streak since the 2004-05 season and helping Miami beat Philadelphia for the 11th straight regular season matchup while Dwyane Wade looked on in street clothes. Bron shot 15-25 from the field (1-2 on threes), plus had 6 rebounds, 4 assists and 3 steals as the Heat improved to 38-14 and 22-2 at home. Miami’s 4-0 season sweep of the Sixers was just another chapter in their domination of Philly in recent history. Even when the Sixers got to within 4 on a Spencer Hawes bucket with just over 4 minutes to play, LeBron turned on the after-burners, scoring the next 10 points for the Heat to close out the game. Evan Turner led Philly with 26 points and Lou Williams added 18, 5 and 5, but that was about it for the 76ers, who had no answer for LBJ in attack mode. Adding injury to insult, Andre Iguodala left the game and did not return after suffering a left eye contusion. Be well, AI.

With Dwight Howard healthy, you’d expect this game to go a certain way. Without Howard in the lineup—or Ryan Anderson or Jameer Nelson—it went unfolded a bit differently. Because they were missing this. Greg Monroe going for 22 points and 11 rebounds without DH patrolling the paint isn’t all that surprising, but it got worse—check these numbers: Detroit shot an insane 57 percent from the field as a team, outrebounded the Magic 45 to 30 and outscored Orlando 56 to 30 in the paint. Meanwhile, the Magic rolled out one of the ugliest starting lineups in recent memory (sorry, it’s true) in Duhon-Davis-Hedo-QRich-JRich. Ugh. Big Baby scored a career-high 31 points (!) and grabbed 10 rebounds, but Orlando lost its fourth straight game.

How fun are the Grizzlies? Facing a 12-point deficit early in the fourth quarter, Memphis ran off 13 unanswered points to regain the lead and pieced together a second straight near-perfect final period to beat the Warriors one night after downing OKC. Clearly delighted by seeing his selection as The Post Up’s cover boy yesterday, OJ Mayo came through with another nice performance for Memphis, scoring a team-high 19 points (including 4 threes) and making every big play down the stretch for the Grizz. After missing the previous game with an ankle injury, Mike Conley returned to heat up Memphis early on, and he finished with 18 points and 5 assists. Golden State fell to 20-32 despite a 22-13-4 line from David Lee and 18 points in just 25 minutes for Nate Robinson. And if you don’t like my recap, here’s Tony Allen’s:

We’ll get to the Phoenix win in a moment, but first thing’s first—to call DeMarcus Cousins anything but a certified beast is a crime at this point. DMC had his way with the Suns’ frontline, racking up a career-high 41 points on 16-25 shooting and 12 rebounds. He would have had more like 45 if not for 5 missed free throws. It’s a wonder the Kings didn’t win this game, considering that every time I flipped over Cousins was doing work down low with ease. Then again, he didn’t get much help. Isaiah Thomas had 25 points, but the 3 remaining Kings starters (yes, that includes Tyreke Evans) scored a combined 10 points on the night. As for Phoenix, Marcin Gortat doubled up with 20 points and 10 boards, Steve Nash dished out 12 assists to go with his 18 points as the Suns got to within 1.5 games of Houston for the 8-seed in the West.

Los Angeles built a 17-point lead in what was never supposed to be a close game. I mean, come on, it’s the Nets! Improbably, New Jersey cut the Laker lead to 84-83 with just over 2 minutes to play on a Gerald Wallace driving lay-in after a 17-6 Nets run to open the fourth quarter. Impossibly, Deron Williams tied the game at 86 on a kick-out 3-pointer with 1:30 remaining. Predictably, Kobe Bryant did what Kobe Bryant does—he drilled a 3-pointer (courtesy of an unbelievable bounce) from damn near halfcourt with 6.8 ticks left on the clock to give the Lakers a 4-point cushion, enough to end the Nets’ 3-game win streak. The finger-gun worthy shot was part of Kobe’s game-high 24 points, barely besting Deron Williams, who scored 20 points and nearly ripped Matt Barnes’ ankles off his body with this double crossover.

Line of the Night: Melo, DMC and Big Baby had big nights but all came in losing efforts. The crown goes to The King on this night—LeBron hung 41 on the Sixers in DWade’s absence.

Moment of the Night: Kobe FTW.

Funny of the Night: McBob on some Harlem Globetrotters type ish. Sorry, Nets.

Dunks of the Night: Philly lost the game, but Iggy won the dunk contest.

Tonight: A dozen games, highlighted by a Thunder-Heat rematch on South Beach, plus Spurs-Celtics, Grizz-Mavs and the rubber match of Battle: Los Angeles at Staples Center.