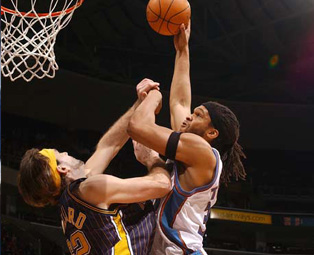 Today, Washington Wizards center Etan Thomas begins his new regular column for SLAMonline.com. Agree or disagree with him, Etan promises to be honest, to speak his mind and hopefully to provoke thought and discourse. Welcome to his world…

We were playing a home game against Cleveland, and after a timeout a referee with dark, slicked-back hair (who shall remain nameless) approached me. He said that he had heard that I write poetry, have a book, speak at universities, am into politics, etcetera, and he asked me if this was true.

To my surprise, he responded: “You’re not as dumb as you look.”

I turned toward my teammate Antawn Jamison, who also heard the exchange, and we both looked back at this ref with eyes of bewilderment, as if to say that we couldn’t have possibly heard him right.

He saw that I was in no way amused, without even the slightest hint of a smile, and attempted to clean up his statement, saying, “Well I think it’s great, I could never do anything like that…” I simply nodded my head and returned to the game.

Sometimes someone can make a statement that is so unbelievably blatant that it renders you speechless, left without a response or reaction, until you think about it at a later date. This was one of those times for me.

I could have interpreted this as a bad joke by a referee who should be more focused on making the correct calls than telling jokes that aren’t funny. Or I could take this as a blatant slap in the face. I could make the connection to a larger problem in society that deals with obliviousness and stereotypes. Is it an unfortunate reality that many people are still dwelling in the pit of ignorance?

I have come to expect a certain reaction of surprise by my extracurricular activities, but this was different. Usually, I am met with words like, “You speak so well,” or “You’re so different, you’re not like the others,” which are all equally offensive to me, but this was on a different level. Why is it beyond the realm of imagination that I could possibly write poetry, have an interest in politics and can express my opinion in a public forum? Would this referee have made that same statement to Wally Szczerbiak, Steve Nash or my man Steve Blake?

Maybe it’s the dreads that threw him off. Or maybe it’s my size. But would he have had the same reaction to Darko Milicic, Rasho Nesterovic or Nenad Krstic?

This is something that I have always had to deal with throughout my life. I remember in high school I was constantly facing similar reactions due to the fact that I was on the Speech and Debate Team. (Made it to the finals at Harvard and led my senior team to a state championship in Speech and Debate.) In college I actually had a teacher tell me that I didn’t belong in his class, that this was Calculus, and shouldn’t I be in Rocks For Jocks or something?

A few summers ago, I went to a bookstore to purchase one of the sequels to Tim LaHaye’s “Left Behind” series. I was literally hooked on each one and was reading them as they came out. The lady behind the counter enquired if I was reading it for a class. I smiled and said, No, I graduated from college some time ago. Then she said, “You’re that basketball player, right?”

I replied yes, and she asked me if I had read all the books leading up to the one I was purchasing. I told her I had. And she said, “Well, it’s nice to know that some of you can read.”

There are certain statements that will always remain in my permanent recollection. This referee has just been added to that list.

I’m not looking to squeeze an apology from him; don’t even want one. Why would he apologize for the way that he feels? That’s like Michael Richards apologizing for his racist, hateful rant. Not likening the referee to Kramer, but don’t apologize for something you’re not sorry about. If you simply regret that people may look at you differently as a result of your feelings, well, that’s an apology you can keep.

Stereotype is defined as an oversimplified standardized image or idea held by one person or group of another. It is 2006, and while we have come a long way, unfortunately in many ways we have also regressed.

It’s sad that so many people are still governed by stereotypes. But I guess that’s the reality that is our present day society.