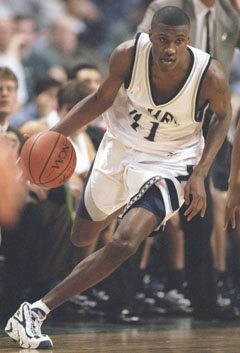 Translating amateur talent to the professional ranks is a tricky business. General Managers have been making themselves look silly for years by drafting guys with “upside” and intriguing “measureables,” only to find the kid wasn’t a player. Quantifying a prospect’s actual talent and ability to play the game can only be done through personal viewing, an amazing grasp of the intricacies of the game, and a whole lot of guts on draft day.

In basketball, NCAA scoring champs have long been major flops in the NBA. The sheer volume of players who put-up huge point totals in the college ranks but have failed in the NBA rivals the number of digits in pi. There are the Rick Barrys and the Pete Maravichs of the world, but they are the exception rather than the rule.

Glenn Robinson, who most felt underachieved in the NBA, is another guy who was able to bridge that gap. But most don’t. The three guys mentioned, all came from big school conferences, and therefore were tested at the highest level of competition. But most scoring champs have historically come from smaller schools, where guys that could have been solid players in, say the ACC or PAC-10, go crazy on a nightly basis against far inferior competition.

In the mid-80s, the Missouri Valley Conference had two of the best players in college history that not only took turns leading the nation in scoring, but both went on to productive and lengthy NBA careers.

Xavier McDaniel from Wichita State and Hersey Hawkins from Bradley basically cemented my love for the college game. A couple years prior, I had rode the ’83 NC State title train (at the ripe age of nine) but it was a game I watched in 1985 that got me hooked for life. Peoria, IL is the home to most of my mom’s family and I spent several holidays and summers in the surrounding area. It was on one such visit that the Bradley Braves were hosting the Wichita State Shockers at Carver Arena in downtown P-Town.

The entire night was about just two guys, as if they were playing 1-on-1, but not guarding each other. The remaining eight on the court were borderline irrelevant as McDaniel and Hawkins put on displays, albeit in completely different fashion. Both players hovered around the 40-point mark with Hawkins a precocious freshman, and “X” just weeks away from becoming the first player in NCAA history to lead the nation in both scoring and rebounding (27 and 15 per game).

In a relatively obscure league like “The Valley,” players can often go unnoticed. McDaniel and Hawkins, for example, were given little national attention until David Stern called their name in the first-round. This got me thinking.

Who else around the league (non-NCAA scoring champs) played in relative college anonymity, but had a contemporary that they battled while “under the radar?”

I came up with a short list. There may be others who belong on this list who I neglected. Let me know who I forgot to mention.

Just a year apart in college, these two MAC titans battled often with Wally’s squad winning three of the five games. Bonzi is not only the school and conference’s all-time leading scorer with 2,485 points, but he also ranks in the top five in both rebounds and assists at the Muncie, Indiana University.

Wally is second all-time in points at Miami (1847); all while shooting an astonishing 52% for his career; twice netting over 40 points in a single game. Most of Miami’s records are topped by a certain Ron Harper, but Wally put the Oxford, OH school on the map during their NCAA tourney runs of the late 90’s.

Earl Boykins and Antonio Daniels were also putting up huge numbers in the MAC around the same time.

Both these dudes had long, productive, college careers and replicated that success as pros. Rent-a-champ Posey was a do-it-all stat-stuffer while a Musketeer. He topped the 1400-point mark and led the team in rebounding for three straight years, despite never starting a game until his senior season.

Mobley played alongside Tyson Wheeler (who I was certain would have a long NBA career) and helped with the rebirth of the Rams’ program. Cat finished his career in the Ocean State with 1334 points and had one of the most beastly, full-speed alley-oop bangs (on a college teammate of mine) I have ever seen. The two split the four games they played while in college.

Both Larry Hughes and Lamar Odom were relevant at the same time, but each gave the Atlantic-10 only one year of their time.

The Big West has never been known as a hoops hotbed and quite possibly their most “decorated” product was the massive bust who goes by the name of Michael Olowokandi. But these two guys went at each other for four years on the left coast. Oddly enough, Harris was the superstar. Ending his career with over 2300 points, the now retired guard is still the school and conference’s all-time leading scorer.

Bowen, on the other hand, was a solid contributor (and not yet a 3-point shooter by any means) who had already laid the blueprint for his now notoriously defensive ability. To his credit, Bowen did score over 1000 points and is the school’s seventh all-time leading rebounder. Although Bowen is still playing and Harris is now retired, the latter still has logged more NBA seasons. Remember, Bowen didn’t make it as a full-time NBA player until 1997.

Harris and Bowen faced each other a whopping ten times over their respective four-year careers, with Long Beach taking seven. Like I mentioned, there are not a lot of Big West cats around, but Cedric Ceballos was a senior during Bowen’s freshmen year at Fullerton. Does that count?

Check Cub Buenning’s scouting website for weekly reports on players. Many players highlighted in Cub Scouts are thoroughly covered on the site.