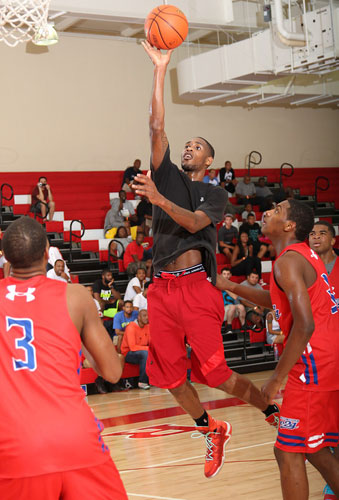 Here are some snapshots from opening day of the Under Armour Elite 24 in Venice Beach, CA. Featuring 24 of the nation’s best high school players—including Andrew Wiggins, Julius Randle, Marcus Lee, Tyler Ennis, SLAM Diarists Aaron and Andrew Harrison, among several others—the Elite 24 is a star-studded weekend that culminates with an all-star game on the outdoor courts of Venice Beach in Los Angeles. The participants first competed in a midnight run on Thursday that featured NBA players such as Brandon Jennings, DeMar DeRozan and James Harden. Since the event’s inception seven years ago, 44 alumni have been drafted to the NBA.

The festivities continue tonight (Friday) with a Three-Point Shootout and Dunk Contest, live on ESPNU at 7 p.m. EST, and finish with the main event, the Elite 24 game, Saturday at 7 p.m. EST, also live on ESPNU. SLAM will be in the house for all of it, so be sure to check back often for updates—both in writing and video—and be sure to check out a preview of the game if you haven’t already.