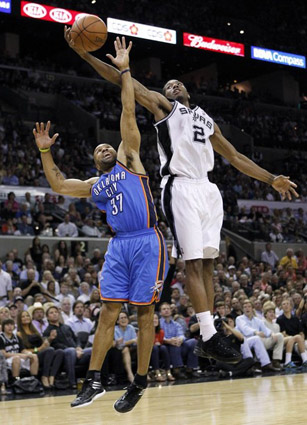 The guys from numberFire have been bringing us the NERD Team and NERD Player rankings all season long, harnessing the power of algorithmic modeling to better understand sports. The numberFire Efficiency Rating Derivative (NERD) better evaluates every player and team in the NBA using offensive and defensive efficiency numbers. With the Conference Finals underway, the NERD experts are bringing us more analysis—this time breaking down the Championship odds for each of the four remaining teams. Below are the Championship odds, as calculated by the NERDs. “Champs” refers to the team’s chances of winning the NBA Finals. “Off.” and “Def.” refer to the teams’ offensive and defensive ratings; these represent the points scored and allowed per 100 possessions. For specific game projections, click here.

The Thunder showed on Thursday night that they will not go down without a fight and despite San Antonio’s previous win streak, this series should be a lot closer than people anticipated after the 2-0 start. In fact, OKC and San Antonio are almost mirror images of one another. The Spurs and Thunder finished No. 1 and 2 in the League in offensive efficiency, scoring 110.9 and 109.8 points per 100 possessions respectively. Both also ended the season with the exact same 103.2 defensive rating. There are three main differences between the teams:

2. The Thunder get to the line at a much higher rate where they finished No. 1 in the NBA (averaging .269 free throws per field goal attempt vs. San Antonio’s middling .195)

That being said, the two teams are nearly identical. In fact, check out our historically similar teams:

Five of the six teams are the same in both cases. And the best matchup predictor? Lakers vs. Jazz in 2008. The two teams played 10 times that season, four times in the regular season and six in the Western Conference Semifinals.  The Lakers won that series 4-2 and would eventually lose to Boston’s Big Three in the NBA Finals.

So, what does that mean for this series? Expect home court advantage to be the biggest factor. If any team is able to steal a game on the road, that will be the deciding factor. But, it is more likely that Game 7 in San Antonio will decide the Western Conference Champion.